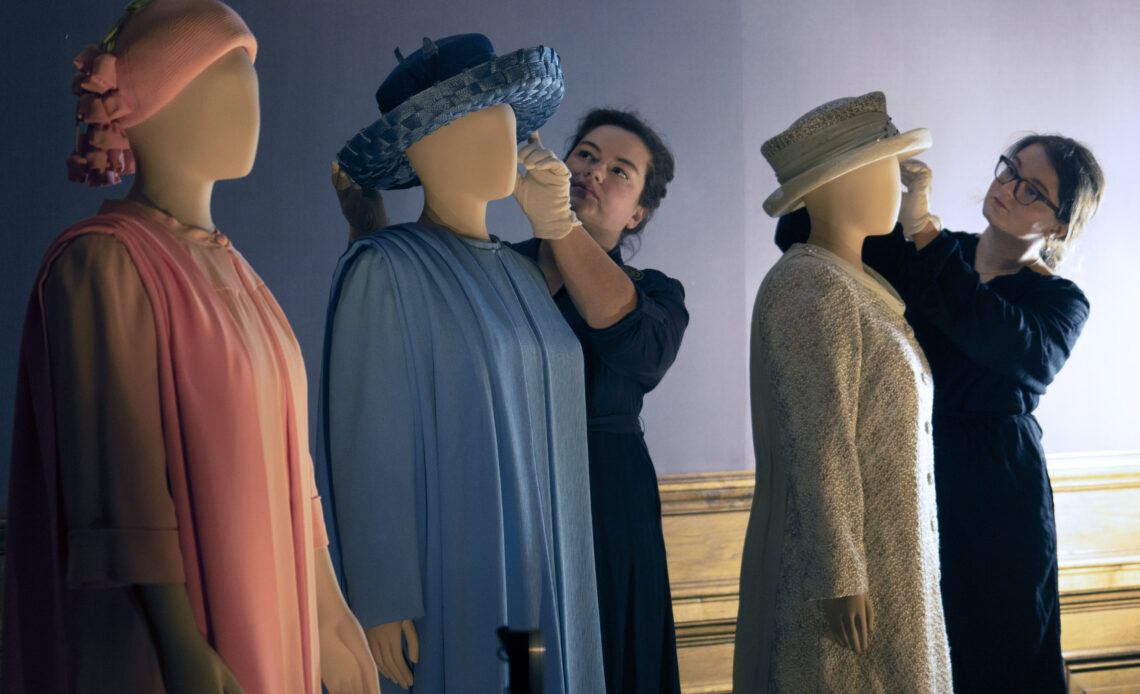 The Royal Collection Trust has three different exhibitions this summer in honour of The Queen’s Platinum Jubilee. The exhibition at Holyrood features three of Her Majesty’s Jubilee looks from her reign.

The Queen’s Silver Jubilee in 1977 was more understated than we have come to expect in the twenty-first century but her style was not. The exhibition features a bright pink day dress with the matching coat, designed by one of her favourite couturiers, Hardy Amies. Milliner Simone Mirmone designed a coordinating hat with silk flowerheads.

The Queen wore the dress, coat, and hat to the Service of Thanksgiving on 7 June, held at St. Paul’s Cathedral, where she stopped to speak with people in the crowds afterwards.

The Queen’s Golden Jubilee in 2002 is also represented in the exhibition. Elizabeth’s bright blue dress and coat were also designed by Hardy Amies. The couturier first dressed the then-Princess Elizabeth in 1951, and continued to dress her for much of her reign. Frederick Fox designed the woven straw hat.

She also wore this striking look to the Service of Thanksgiving, held again at St. Paul’s Cathedral on the 4th of June.

Her Majesty’s Diamond Jubilee in 2012 is represented in the Holyrood exhibition with a stunning light turquoise and silver embroidered coat. To complete the trifecta, this was worn to the 2012 Service of Thanksgiving and then to a luncheon after at Guildhall on 5 June .

The exhibition at Holyrood opened on Sunday 3 July and will be on until Sunday 25 September. It was announced this weekend that both of The Queen’s Platinum Jubilee ensembles will also be going on display at Holyrood.

The Platinum Jubilee exhibition at Buckingham Palace focuses on The Queen’s Accession, and the exhibition at Windsor Castle this summer is exploring Her Majesty’s 1953 Coronation.