The wedding dress of the Duchess of Cambridge 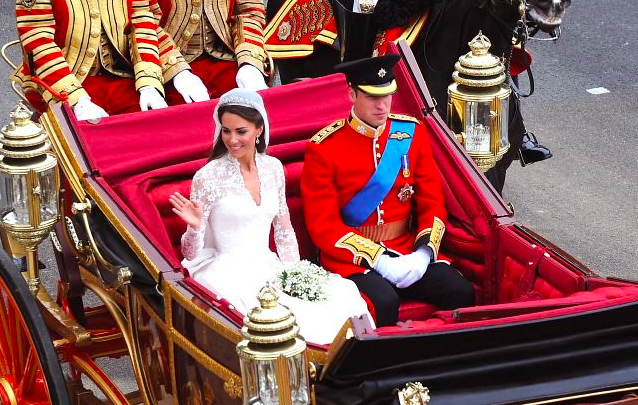 The Alexander McQueen brand is renowned for pushing the limits of fashion, but when Kate Middleton stepped out of the Rolls Royce Phantom VI in front of Westminster Abbey on the morning of her wedding on 29 April 2011, the Alexander McQueen dress she wore was classic and traditional.

Designed by Sarah Burton, the new creative director for Alexander McQueen, with input by Kate and lacework by the Royal School of Needlework, Buckingham Palace revealed that “Miss Middleton chose…Alexander McQueen for the beauty of its craftsmanship and its respect for traditional workmanship and the technical construction of clothing.

“Miss Middleton wished for her dress to combine tradition and modernity with the artistic vision that characterises Alexander McQueen’s work.”

The lace was supplied by the Royal School of Needlework, “hand-engineered (appliquéd) using the Carrickmacross lace-making technique… Individual flowers have been hand-cut from lace and hand-engineered onto ivory silk tulle to create a unique and organic design, which incorporates the rose, thistle, daffodil and shamrock,” notes the Palace.

The lace workers were required to wash their hands every 30 minutes and were not initially told that they had been working on Kate’s wedding dress.

Kate’s dress was inspired by Victorian design and utilised the principals of corsetry to create a narrow waist and padded hips. The bodice featured many of the lace pieces designed by the Royal School of Needlework, and the skirt opened up to echo the opening of a flower. The back of the bodice featured 58 buttons covered by gazar and organza that fastened by Rouleau loops. A modest train – nine feet in length, nothing compared to her late mother-in-law’s 25-foot train completed the dress.

All of the fabrics used for Kate’s dress were supplied by British companies, with the exception of the French Chantilly lace used on the bodice and skirt and were sourced by Sarah Burton herself. The dress was made with ivory and white satin gazar.

Kate’s dress was immediately iconic, but it also called back to previous royal wedding dresses, with commentators noting its design was similar to Princess Margaret’s and Princess Grace of Monaco’s wedding dresses.

Kate topped off the bridal look with a veil that was sewn by the Royal School of Needlework, made from soft, ivory silk tulle and a hand-embroidered floral trim. A tiara anchored the veil, the Cartier Halo Scroll Tiara, which was originally a gift from the future King George VI to his wife, the then-Duchess of York.

On her feet, she wore heels designed by Alexander McQueen made from ivory duchesse satin that were hand-embroidered by the Royal School of Needlework.

Kate’s wedding dress was on display at Buckingham Palace from 23 July to 3 October as part of the summer exhibit in 2011.

Kate’s dress features in a new book by Royal Central. You can buy Royal Weddings: A Collection from Royal Central on Amazon in both ebook and paperback.