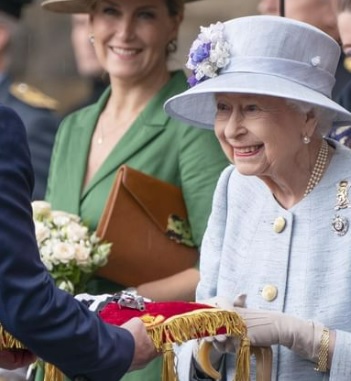 The Queen has arrived at the Palace of Holyroodhouse in Edinburgh to start the week of engagements that traditionally takes place at the start of summer.

Her Majesty’s arrival was only confirmed a few hours before her car drove into the Palace’s grounds. She was accompanied by the Earl and Countess of Wessex.

Holyrood Week usually takes place at the end of June and includes a series of events as well as a garden party and in Investiture in the Scottish capital.

The Queen used a stick for the short walk from her to the place where she was officially welcomed to the Palace.

The Queen smiled broadly as she accepted the keys with the traditional response of ”I return these keys being perfectly convinced that they cannot be placed in better hands than those of the Lord Provost and Councillors of my good City of Edinburgh.”

The keys are then handed back for safekeeping to the city’s officials.

The Queen was also presented with a posy of summer flowers including pale pink roses and light blue blooms, matched to her pale blue coat and hat.

Edward and Sophie, whose Scottish titles are the Earl and Countess of Forfar, were with her throughout the ceremony.

The Prince of Wales, the Duchess of Cornwall and the Princess Royal are expected to join The Queen during Holyrood Week.

Buckingham Palace has already confirmed that Her Majesty expects to attend a special ceremony at Holyrood on June 28 2022 when the Armed Forces will pay tribute to her in her Platinum Jubilee year.