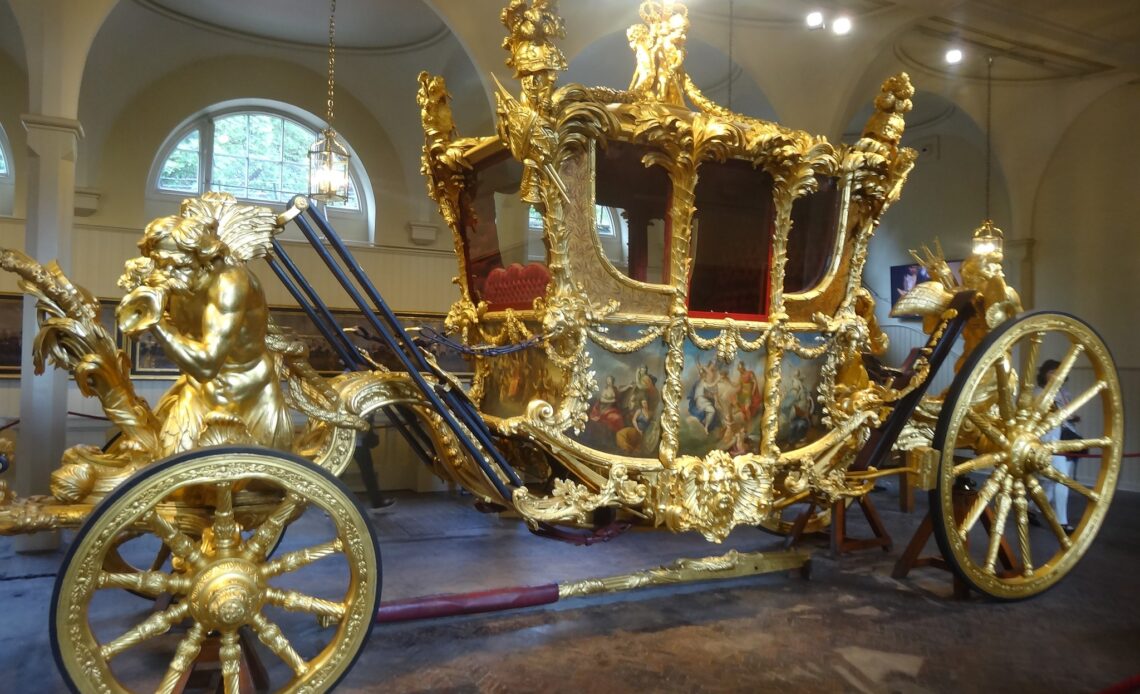 The Gold State Coach will play a central role over the Platinum Jubilee Weekend, showcasing footage of The Queen, her historic reign, and her coronation on the newly-remodeled windows.

Let’s look into the history of the Gold State Coach, which dates back to the reign of King George III and has been in use continuously ever since.

The Gold State Coach was commissioned in 1760 by The King’s Master of the Horse, Francis Hastings, 10th Earl of Huntington, to be used at King George III’s coronation and wedding to Princess Charlotte of Mecklenburg-Strelitz, but it was such an enormous undertaking in both design and build that the Coach wasn’t ready for use until 1762, when King George III rode in it to the State Opening of Parliament on 25 November 1762.

Despite the Gold State Coach being in continuous use for 260 years, it has only been overhauled four times: in 1820 upon King George IV’s accession; in 1902 for King Edward VII’s coronation; in 1952 for The Queen’s coronation; and in 1977 ahead of the Silver Jubilee. The Gold State Coach was also used during The Queen’s Golden Jubilee in 2002, but was not used by The Queen and The Duke of Edinburgh at the Diamond Jubilee in 2012.

Aside from coronations, The Gold State Coach has been used for the State Opening of Parliament, though Queen Victoria stopped using it after Prince Albert’s death and travelled by other means when she opened Parliament after 1861.

The Gold State Coach is on public display at the Royal Mews when not in use.

The Gold State Coach is made of giltwood, wood with a thin layer of gold leaf over it. Due to its heavy weight and suspension—weighing four tonnes, seven metres long and 3.6 metres tall—it can only be driven at a walking pace.

Its design was a collaborative effort between King George III’s Master of the Horse and wealthy patrons from the arts community. A triton above each wheel was to denote spreading the news of good government; on the main body, paintings of gods and goddesses represent the arts, sciences, virtue, security, and peace and prosperity; Britannia is displayed on the front panel sitting near the River Thames; on the coach roof is the British Imperial Crown held up by three cherubs that represent England, Scotland and Ireland.

Buckingham Palace announced on May 6th that the Gold State Coach will ride out ahead of the procession during the Platinum Jubilee Pageant displaying footage of The Queen throughout her reign.