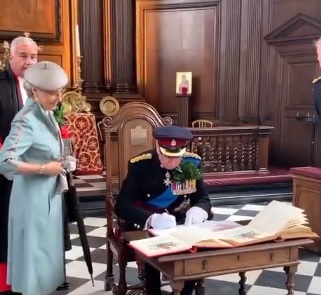 The Duke and Duchess of Gloucester have been out on an engagement while many of the royals are off for holidays. The pair visited the Royal Hospital Chelsea to attend the annual Founder’s Day Parade with the Duke there as the Reviewing Officer.

The Gloucesters were visiting the hospital to inspect the Chelsea Pensioners at the annual Founder’s Day Parade. It marks the hospital’s founding in 1682 by King Charles II and opening in 1692 under Queen Mary and King William III. A member of the Royal Family normally attends the parade to inspect, but the parade hasn’t been held since 2019 due to the global health crisis. The parade typically takes place on 29 May but was postponed until August 5 as lockdown restrictions continued in England.

The parade also marks Oak Apple Day, which commemorates the future-Charles II’s escape after the Battle of Worcester in 1651. Both The Duke and Duchess wore oak leaves to mark this.

The pair took time to speak with several Pensioners after the parade. They signed the guest book at the Hospital, and then also spoke with staff members who have been caring for the residents throughout a difficult year and a half.

Interestingly both The Duke and Duchess wore face masks. When other royals have not worn face masks at outdoor events, many have argued that to wear a face mask when not required would be a political statement. However, Richard and Birgitte both kept their masks on throughout the engagement.