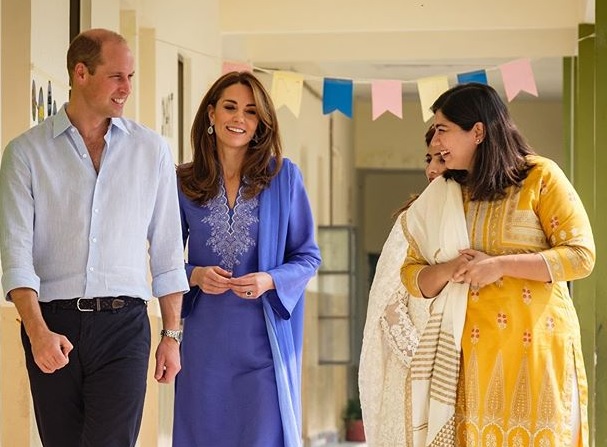 The Duke and Duchess of Cambridge marked the first anniversary of their royal visit to Pakistan on Friday by sharing two videos of reunion video calls with organisations focused on children.

William and Kate first released a video of their Zoom call with young pupils at the Islamabad Model College for Girls, where they all played a game of Pictionary before chatting about how COVID-19 has impacted their education.

“We want to play a little game with you,” the teacher tells the royal couple. Students are then shown giving William and Kate a thumbs up as they guess the drawings of a birthday party and a cricket pitch.

“So do you appreciate being back in school now and seeing your friends and your teacher?” the Duchess asked the students after their game. They all replied, yes. One of the students then asked if the royals like to draw, with Prince William replying that they do, but qualified that, “Catherine is very good, I am really bad.”

One of the students asks why the Duke is a bad drawer, and Kate says it’s because “You don’t practice enough.”

The video then switched to the Duke and Duchess chatting with the teachers at the Islamabad Model College, and Kate said, “You’re doing an amazing job, particularly now when things have been so difficult. You’re a real lifeline to families out there so congratulations on all the hard work.”

On their visit to the Islamabad Model College for Girls last fall, William and Kate learned how the government-run school, operating with support from the Teach for Pakistan programme, has supported young women from age four to 18-years-old.

In their second video call, Their Royal Highnesses chatted with young people at the SOS Children’s Village in Lahore, a place they visited twice during their visit last year. During their visit, they helped celebrate a birthday party; a few days later, due to an unexpected gap in their schedule caused by weather, they paid another visit to the children’s charity.

William recognised one of the young boys in the video call, “I’m recognising you now with your masks on. We played cricket, didn’t we, last time?” The little boy nodded his head.

Kensington Palace shared the video with the caption, “The Duke and Duchess were reminded of their cricket skills, or perhaps lack of cricket skills in this instance…”

“You were very good with your bowling and your batting,” William said as the little boy presented a picture he’d drawn of the two of them playing cricket. “That’s you catching me out,” the Duke said, “That happened quite a lot if I’m right.”