Style Moments of a Reign: the Monarch at Trooping the Colour 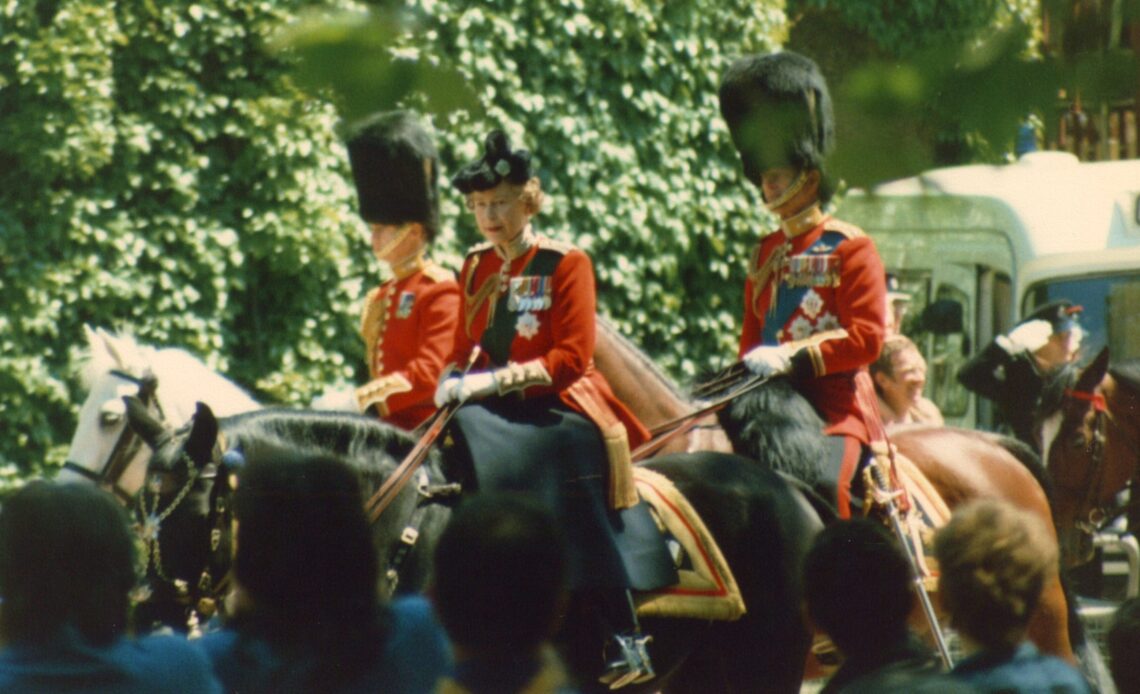 The Queen’s official birthday is marked every year in June with the Trooping the Colour ceremony—a military pageant and flypast celebrated with the wider Royal Family and the public in London.

Though for the past 36 years she has participated in Trooping the Colour by riding in a carriage and wearing a dress, for the first 34 years of her reign, The Queen rode in the parade itself and wore a military dress uniform.

As we look back on some of the most iconic style moments of The Queen’s reign, let’s focus today on the military dress uniform she wore at Trooping the Colour in the first half of her reign.

Upon her accession in 1952, The Queen became the head of the Armed Forces and Colonel-in-Chief of 16 British Army regiments, including the Life Guards, the Grenadier Guards, the Coldstream Guards, the Scots Guards, the Irish Guards, and the Welsh Guards.

From her first Trooping the Colour as Sovereign until 1986, The Queen wore a specially designed military dress uniform in the style of Colonel-in-Chief of the Grenadier Guards. Her uniform differed from the official uniform in that her tunic was created with a cut-away at the waist to allow her to ride her horse side-saddle during Trooping.

The hat worn by The Queen mimicked the tricorn style and featured a regimental plume at the front. The Queen wore this uniform through to 1986 when she retired from riding in the Trooping the Colour ceremony.

Beginning in 1987, The Queen took part in Trooping the Colour by carriage and started to wear day dresses and hats to the ceremony instead of a military uniform.

Prior to her accession, from 1947 to 1950, The Queen wore a dress uniform as Colonel of the Grenadier Guards; that of a blue wool tunic with the cut-away to allow for side-saddle riding and a forage cap.

According to the Royal Collection Trust, The Queen’s military uniforms were designed by Bernard Weatherill, an equestrian tailoring firm, and her hats by milliner Aage Thaarup.

As part of The Queen’s 90th birthday celebrations, for an exhibition of key style moments from her reign, her military dress uniforms as Colonel and Colonel-in-Chief of the Grenadier Guards went on public display.