Forty years on: the royal fairytale wedding that missed its happy ending 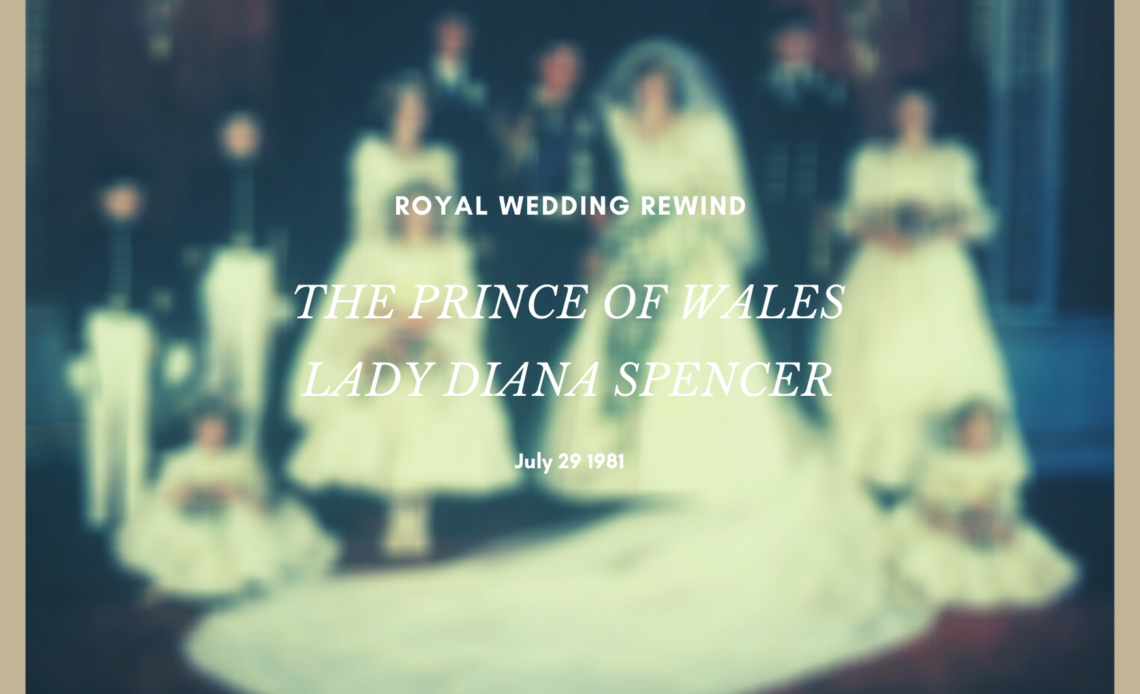 In the end, it wasn’t the fairytale marriage the world had hoped for, but on 29 July 1981, Prince Charles, the Prince of Wales and Lady Diana Spencer married in a glittering ceremony that could best be described as a fairytale, watched by an estimated one billion people. Forty years on, Royal Central looks back at this historic day.

Prince Charles and Diana had known each other for several years before they began seeing each other and dated for around six months before the Prince proposed. Their engagement was officially announced on 24 February 1981 and the couple gave an interview to mark the occasion where Prince Charles infamously replied to the question “Are you in love?” with “Whatever in love means.”

Diana was presented with a blue Ceylon sapphire and diamond engagement ring that now rests on the Duchess of Cambridge’s finger and inspired many copycats. Their wedding date was set for Wednesday, 29 July 1981 at St Paul’s Cathedral.

The couple chose St Paul’s Cathedral over the more traditional pick of Westminster Abbey because of its seating capacity. It also provided a longer procession route. In total, over 3,500 guests attended the ceremony and two million people lined the route hoping for a chance to see the couple.

Prince Charles was accompanied by his younger brothers, Princes Andrew and Edward, as supporters. Diana’s elder bridesmaids were Lady Sarah Chatto, the daughter of Princess Margaret, and India Hicks.

Diana’s wedding dress was designed by husband and wife David and Elizabeth Emmanuel, chosen because Diana liked the blouse they’d provided her for her engagement portraits.

Speaking about the dress, the designers have said that “it had to be something that was going to go down in history, but also something that Diana loved.”

The dress was made of ivory silk taffeta and antique lace and included a 25-foot train. The Emmanuels later admitted that they hadn’t factored in the Glass Coach when designing the train and, consequently, when Diana stepped out of the carriage at St Paul’s, it emerged crinkled. The puffed sleeves, full skirt and the long train, became instantly iconic and helped to define 80s trends. Diana topped off the dress with the Spencer family tiara.

Guests included all members of the British Royal Family and the Spencer family; royals from Belgium, Bulgaria, Denmark, Greece, Hanover, Japan, Jordan, Lesotho, Liechtenstein, Luxembourg, Monaco, the Netherlands, Norway, Romania, Sweden, Thailand, Tonga, among others; the then British Prime Minister, Margaret Thatcher, and the Presidents of France and Germany, the Prime Minister of Turkey, US First Lady Nancy Reagan (on behalf of her husband, President Ronald Reagen); and all the Governor Generals of the Commonwealth countries.

One notable miss was the Spanish Royal Family, who didn’t attend because the Prince and Princess of Wales would spend part of their honeymoon in Gibraltar, a disputed area between the British and the Spanish.

The ceremony was a traditional Church of England service presided over by the then Archbishop of Canterbury, Robert Runcie, and the Dean of St Paul’s Cathedral. Somewhat controversial for the time was the bride’s decision to omit the word “obey” from her vows. Diana mixed up her husband’s name when prompted, saying “Philip Charles Arthur George” instead of “Charles Philip Arthur George”, and Prince Charles offered his wife “thy worldly goods” instead of “my worldly goods.”

Following the wedding, Diana assumed the feminine form of her husband’s titles, officially becoming the Princess of Wales, among a host of others. Immediately following the ceremony, the couple undertook a procession back to Buckingham Palace for a reception with 120 guests.

They appeared on the balcony as well and delighted the crowd by kissing. This sparked a tradition, with Prince Andrew and Sarah Ferguson, then Prince William and Catherine, following suit on the same balcony. They had 27 wedding cakes, though the official cake was made by the Naval Armed Forces.

Following the reception, the couple departed for their honeymoon at Broadlands, followed by a three-day stay at Gibraltar before taking a Mediterranean cruise on the Royal Yacht Britannia and eventually heading to Balmoral to stay with the rest of the family.

The couple went on to have two sons, Prince William and Prince Harry, but their marriage faltered. The Prince and Princess of Wales separated in 1992 and divorced in 1996.

Prince Charles later married Camilla Parker-Bowles, who is now known as the Duchess of Cornwall. Diana never remarried and was tragically killed in a car accident in Paris, France, on 31 August 1997.