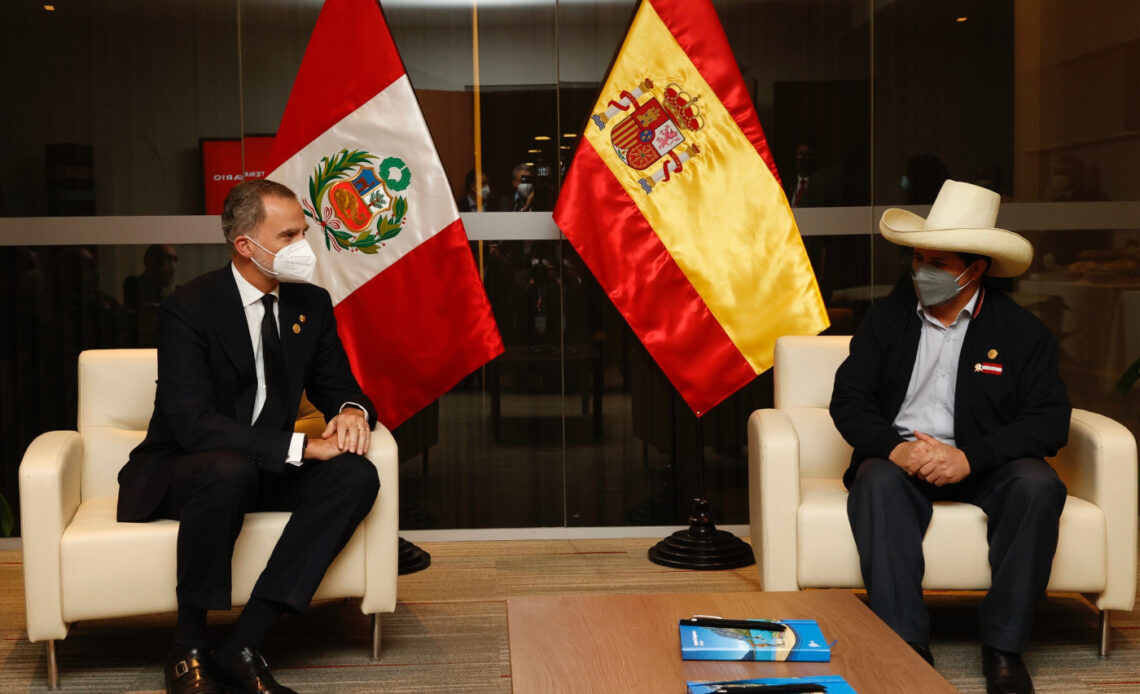 On Tuesday and Wednesday, King Felipe travelled to Lima to represent Spain at the inauguration of Peru’s President-elect Pedro Castillo.

His Majesty departed from Madrid Barajas Airport on board the state aeroplane, on which also travelled the State Secretary for Latin America and the Caribbeans and for Spanish in the World, Juan Fernández Trigo.

At his arrival at El Callao Air Base, in Lima, His Majesty was greeted by the Minister of Foreign Trade and Tourism of Peru, Claudia Eugenia Cornejo.

On Tuesday morning, the King held a meeting in the Spanish Embassy in Peru with a delegation of members of the Spanish community in the country, and in the afternoon he met with President-elect Castillo in the Convention Centre in Lima, with both being accompanied by small delegations of authorities.

Then began the events leading up to the inauguration, with a ceremony held in Plaza de Armas, in Lima, by outgoing Peruvian President Francisco Sagasti to celebrate the 200 years of Peru’s independence. Following the reception, King Felipe had a meeting with his host.

The day was finalised by outgoing President Sagasti offering all the heads of state and government present a dinner.

On Wednesday, King Felipe started his day by maintaining meetings with both the presumptive president of Colombia Ivan Duque and the President of Chile, Sebastián Piñera.

His Majesty watched the ceremony which established Pedro Castillo as Peru’s new President and flew home.

Being present for other heads of state’s inaugurations is one of the duties that the highest authority in each country has to undertake. King Felipe has been undertaking such engagements since even before he was proclaimed King back in 2014, as increasingly King Juan Carlos sent him to inaugurations in countries that were too far for him to travel to.

In particular, the Spanish sovereign is expected to attend inaugurations of heads of state in countries that have Spanish as their primary language. However, curiously enough, on the day of his proclamation, King Felipe didn’t have any foreign authorities as guests, and instead offered a reception for prominent members of the Spanish society.