Royal Wedding Rewind: the Duke and Duchess of Windsor 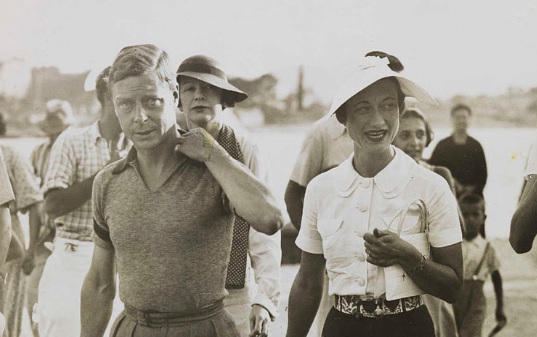 It was the wedding that changed the Royal Family forever. The marriage of Edward, Duke of Windsor to Wallis Simpson on 3 June 1937 was the final act of a dramatic series of events that had reverberated around the world. For, of course, the groom had given up his throne to marry his bride and the crisis his Abdication had produced, less than six months earlier, had shaken the House of Windsor to its core. Now, on a sunny day in France, Edward wed the woman he loved. Their wedding remains as potent a moment in time now as it was all those decades ago.

The controversy around their romance was still simmering on the day they became husband and wife. Just a year earlier, Edward VIII had been the brand new king with modern ideas whose reign, for some, promised so much. The revelation that he was in love with American Wallis Simpson, who had been divorced twice, caused huge controversy which only increased when it became clear that the king meant to marry her.  The crisis became political and urgent and on 11 December 1936, Edward gave up his throne. His younger brother, Albert, became George VI and one of his first acts as king was to confer the title of Duke of Windsor on Edward.

A later confirmation of Edward’s title added that should the duke marry, his wife and any descendants would be barred from holding royal status. The Duke of Windsor and his bride were unhappy with the decision but George VI held firm on that. The new king was also adamant that none of his family would attend the marriage that had brought so many difficulties to the House of Windsor. And so a low key ceremony in France took shape but nothing about this marriage was straightforward.

Even the wedding date proved controversial. Edward and Wallis decided to marry on 3 June, the birthday of his father, King George V. Queen Mary saw this as a slight.  The couple wed in a small ceremony with Randolph Churchill and Edward Dudley Metcalfe among the guests. Not that that stopped interest in the event with every detail of the marriage pored over in the press around the world.

The wedding took place at the Chateau de Cande near Tours in France, owned by Charles and Fern Bedaux.  It had been a bolthole for Wallis in the years before her marriage when European press, aware of her relationship with Edward, had begun to pursue her. The Duke and Duchess of Windsor would, at some point, carve their names into the wooden surround of a fireplace there – it is now a lasting reminder of the historic wedding which took place at this quiet chateau.

Wallis, famed for her fashion sense and love of the latest styles, wore blue for her wedding – a shade said to have been made to match her eyes exactly and which later became known as Wallis blue. The gown, made of silk crepe, was designed by Mainbocher of Paris and would eventually end up in the Metropolitan Museum of Art in New York.

The full-length outfit included a jacket with long sleeves and high neck ending with a fitted waist with button details and giving way to a fitted skirt with a gentle flare. The bride also wore a hat by Caroline Reboux with an undertrim of flowers and shoes by Georgette, all in the same shade of blue. At her neck, she wore a sapphire and diamond brooch.

Once husband and wife, the couple posed for photographs on the steps of the Chateau. Their official portraits, with some also taken inside as well, were the work of Cecil Beaton and went around the world. For theirs was a love story which had cost the groom his crown and shaken an ancient throne to its very roots and which still resonates in royal history books today.