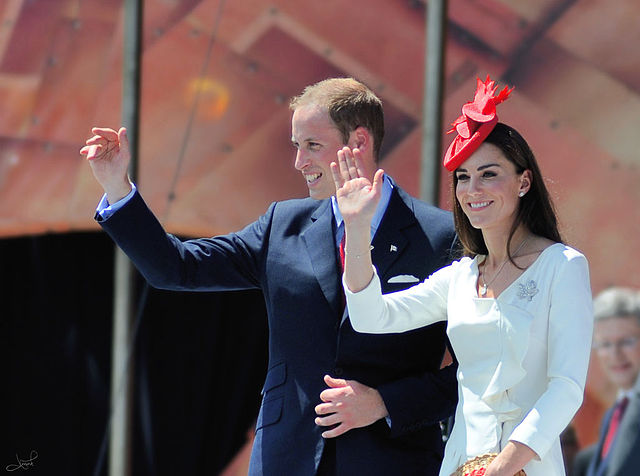 Taking place just two months after their April 2011 wedding, the Cambridges’ tour of Canada was the first moment the couple entered the global stage in an official working capacity.

Travelling from 30 June to 8 July, the couple toured coast-to-coast, drawing in massive crowds (an estimated 800,000 people showed up on Canada Day) and drumming up press coverage wherever they went. Our team is sharing their favourite looks the Duchess of Cambridge wore on this important tour.

This was one of my favourite tours the Cambridges have undertaken over the years, so naturally, I chose to feature it first. It feels so nostalgic to me as I remember all of the excitement from the wedding was still fresh, and interest in Kate’s fashion was arguably at an all-time high. It was so exciting to wake up every morning to see where they were going, what they were doing, and of course, what the Duchess of Cambridge was wearing.

One of the best looks from the tour was actually the first – and one that could easily still be worn a decade later. The navy lace ‘Cecile’ dress was by Canadian designer Erdem, making it not only tasteful and elegant but a nice tribute to their host country. It truly is the type of dress you could wear to so many occasions, from a work event to a wedding, and inspired many women to seek out similar lace shifts.

My second favourite outfit from the tour was the red Catherine Walker coat dress she wore on the final day in Canada. Dressing in one of the colours of the Candian flag and wearing The Queen’s maple leaf brooch was an excellent example of fashion diplomacy. I was so in love with this brooch that I tried to seek out a similar one for years, and when I eventually found one in 2020 at an antique store, it was one of those special shopping moments.

It’s hard to believe it was 10 years ago when the Sledge reigned supreme, but Kate relied on these L.K. Bennett shoes heavily during their first royal tour (and, let’s face it, plenty of other times). Say what you will about the beige patent leather heels, but they truly do go with everything and proved a versatile shoe for different outfits such as both of the ones above.

One of my favourites ever Kate looks came at the end of the Canada tour in 2011. I am a huge fan of this Alice by Temperley shirt, which she wore with jeans for a visit to the Calgary Stampede.

It was a first signal from the Duchess that casual tour dressing was one of her style strengths and the outfit set the template for a decade of looks for less formal events on important visits. But most of all, I love the pattern on this pretty shirt and the lace detail at the top, which adds extra interest. Yes, I’d still buy it a decade on.

Another all-time favourite is my second pick. For a concert marking Canada Day, the Duchess of Cambridge opted for a fabulous dress from one of her favourite designers, Issa, and added a bit of royal regalia for a classic look.

I love this colour on Kate and would like to see a bit more in her wardrobe to match it. It’s rather royal but what really added the regal touch was another wear for the famous Maple Leaf brooch, loaned to her by The Queen. The simple shape of the dress with the sparkle of the jewels made this a stand-out look for me.

Kate cemented her position as a fashion maven with this tour; I’m hard-pressed to find an outfit I disliked, let alone whittle down my top two! Ultimately though, I have to go with this nautically-inspired cream sailor dress, which was designed by Sarah Burton for Alexander McQueen. It was perfect for the seaside province of Prince Edward Island and evoked Anne of Green Gables, in my opinion (which is said to have been one of Kate’s favourite books growing up, and a reason why she was so keen to go to PEI when the tour was announced).

One of my favourite aspects of Kate’s style is the way she subtly calls upon nautical and military themes in her clothing when the situation calls for it, and she hit it out of the park with this McQueen dress.

Another favourite look: this beige Malene Birger dress Kate wore for a welcome ceremony at the Somba K’e Civic Plaza in Yellowknife, Northwest Territories. It’s a chic dress (accessorised with her trademark beige pumps) that looks great and functions well for a day of packed engagements that included a street hockey game. We don’t much see Kate in this style of dress anymore, she’s favouring midi-length dresses lately, but it’s so characteristic of her earlier style that I can’t help but love it.

One of my favourites from the 2011 Canadian tour was her laid back style she sported during the dragon boat race on Prince Edward Island. She and William raced against each other, and the Duke came out victorious. Kate wore a black Nike windbreaker and J Brand jeans for the event. I really liked how she paired them with a pair of Sebago flats. She did add a bit of sparkle with her citrine Kiki McDonough earrings. Besides the boat race, it was a rainy day, so the outfit choice was perfect.

On day one of the tour, the Cambridges attended a Celebration of Youth barbeque reception. For the event, Kate wore an Issa jersey bird-print dress and matching Pied a Terre wedges. She accessorised with Vinnie Day gold jewellery and a Tiffany bracelet. I think the dress is so cute and was the perfect choice for a cookout event on their first day. I’m sure they were exhausted after their flight and day, so this outfit hit the right balance of being appropriate for the event while still being comfortable.

As a Canadian and a royal watcher from a very young age, I was absolutely thrilled by this tour. I am quite sure that it felt like a very big undertaking to the new Duchess, but she handled it with aplomb and with quite the wardrobe.

Although it is very casual, one of my favourite looks from this tour is from their stop in the Northwest Territories. While the Duchess of Cambridge does enjoy a good casual look, she has quite a set look that is usually a sweater or waxed jacket with jeans. However, the combination of the Canadian Rangers hoodie and skinny jeans with boat shoes felt very natural here in Canada, in a way that her casual looks in the UK wouldn’t. I also loved that she wore another Candian emblem besides her brooch. I keep hoping for another hoodie look from Catherine, but we will have to see…

And of course, her daytime look for Canada Day. While a maple leaf might be an obvious choice while visiting Canada, I think it was the perfect fascinator to wear on her first Canada Day. Sylvia Fletcher’s design for Lock & Co combines the elegance of British millinery with the colour and symbol of Canada, and it certainly made a statement on Parliament Hill. And that isn’t to forget her dress- this classic white Reiss dress harkens us back to the Duchess of Cambridge’s younger styles, and it makes me miss them. As Jess said, she is now dedicated to the midi-length, but it would be fantastic to see her in a classic knee-length sheath again.