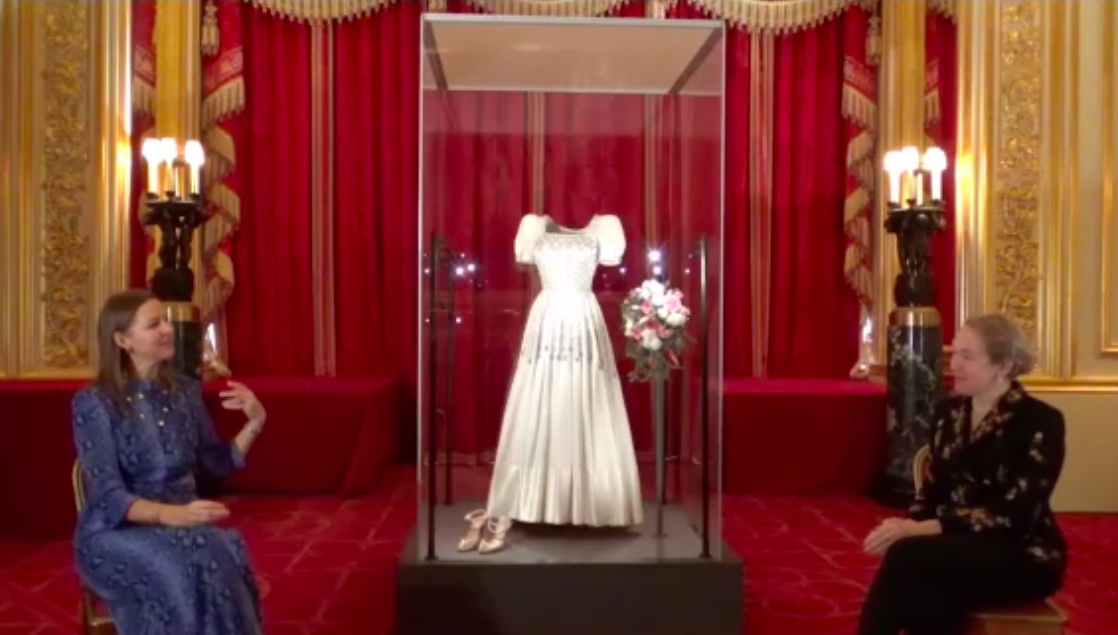 On 10 February in 1840, Queen Victoria married Prince Albert of Saxe-Coburg and Gothe at St James’s Chapel. The Royal Collection Trust (RCT) chose to mark the 181st anniversary of the wedding by looking back at several royal wedding dresses, from Queen Victoria’s dress to Princess Beatrice’s dress.

Throughout the entire talk, one continuous theme was the strong tradition of using British designers for royal wedding gowns. Queen Victoria started the tradition of using British artisans and British textiles in her wedding and required her daughters and daughters-in-law to do the same. Princess Alexandra of Denmark received famed Brussels lace as a gift from King Leopold for her 1863 wedding to the Prince of Wales, but the Queen made her instead use British lace.

Princess Elizabeth’s gown was created by the “First Knight of Fashion” Sir Norman Hartnell for her 1947 wedding to Prince Philip. Hartnell had designed several wardrobes and gowns for Queen Elizabeth (later the Queen Mother) and Princesses Elizabeth and Margaret, and designed gowns for the wedding attendants, as well as the other royal women for the post-war celebration. He would also go on to design Princess Margaret’s simple but stunning gown for her 1960 wedding.

Both the Duchesses of Cambridge and Sussex turned to British designers for their wedding gowns. The Duchess of Cambridge chose Sarah Burton at Alexander McQueen to design her 1950s influenced 2011 gown, while the Duchess of Sussex worked with Clare Waight Keller at Givenchy for her simple but elegant gown. Although the dresses were quite different, they reflected each royal bride and were appropriate for their own royal wedding.

The other central theme that ran through the talk was the influence of history and past royal wedding gowns. The Duchess of Cambridge’s wedding dress was influenced by Her Majesty’s own wedding gown, including a similar silhouette. Princess Beatrice’s gown was originally one’s The Queen’s Hartnell gowns, reworked and altered for her small 2020 wedding. Interestingly, all of the changes made to the dress for Princess Beatrice are reversible so that the gown can return to its original state.

One notable dress missing from the talk was Princess Eugenie’s gown, designed by Peter Pilotto and Christopher de Vos. The Princess chose to use the design of her dress to highlight the scars from her scoliosis surgeries, making it even more personal.

The Royal Collection Trust does own several royal wedding gowns, the earliest surviving gown in the collection belonged to Princess Charlotte (married in 1816 to Prince Leopold). Some of the modern royal wedding gowns are still privately owned by the royals who wore them, but most do go on display for a period after their wedding. Hopefully, the RCT will do a larger exhibition with several gowns in the future.