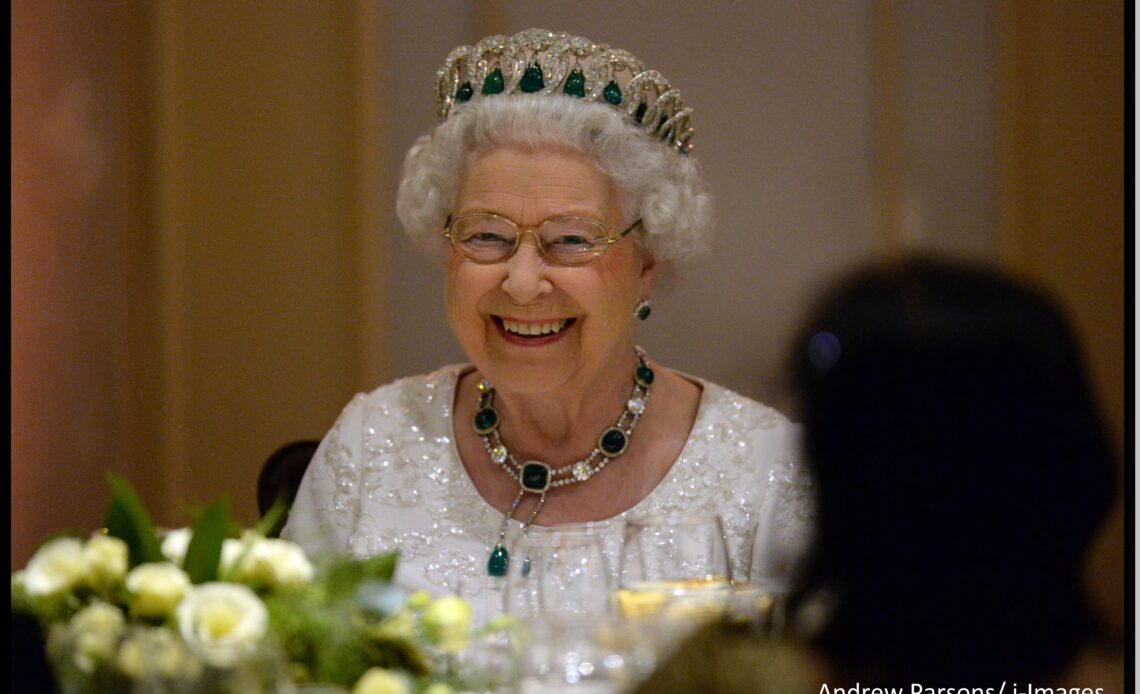 There are a few pieces in The Queen’s jewellery vault that she has worn time and time again throughout her reign. The Grand Duchess Vladimirovna Tiara remains one of her favourite pieces to this day.

In The Queen’s Jewels, Leslie Fields explains that she commissioned a “diamond tiara of fifteen interlaced circles, with a swinging oriental pearl suspended in each” in 1890.

With the Revolution in 1917, the Grand Duchess was forced to escape to the Causcaus, and then in 1919 was finally forced to flee to Zurich. Many of her jewels had been hidden in a safe in the Vladimir Palace in St. Petersburg. An Englishman, Bertie Stopford, broke into the palace to rescue her jewels and sent them on to London disguised in Gladstone bags.

In 1920, Miechen died in Paris, with the war and revolution taking its toll on her health. Her jewels were divided up amongst her children, with her daughter, Grand Duchess Elena Vladimirovna inheriting this tiara.

Elena had married in the Greek royal family in 1902, and she and her husband, Prince Nicholas of Greece and Denmark were badly in need of funds to raise their three daughters. In 1921, she sold the Grand Duchess Vladimirovna Tiara to Queen Mary.

Queen Mary held a significant store of jewels herself. In 1924, she commissioned court jeweller Garrard to create a third setting for the tiara to use fifteen of the Cambridge Emeralds.

Her granddaughter, Queen Elizabeth II, inherited the tiara upon her grandmother’s death in 1953. The Queen wears this tiara in both the pearl and emerald settings, though rarely wears it widowed (without either).

While The Queen has worn this tiara at countless public events and state occasions, she notably wore the tiara at a state banquet in 2014 when Irish President Michael D. Higgins visited; she fittingly wore the tiara in the emerald setting.