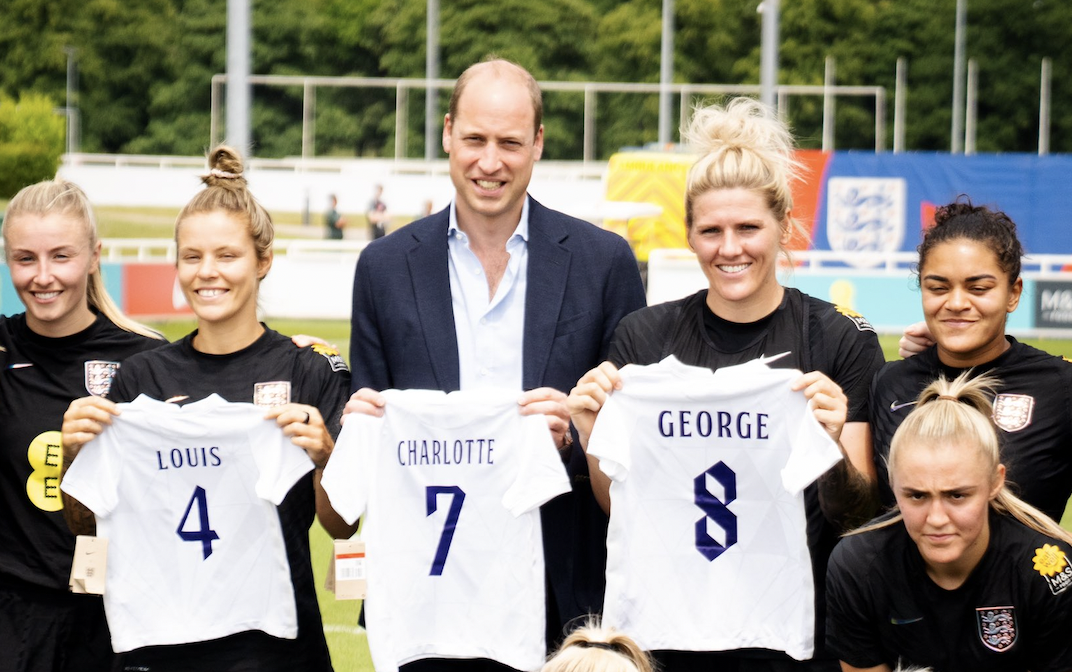 The Queen’s Platinum Jubilee gave the Cambridge kids the rare opportunity to take part in some public engagements, and although she stayed at home this time, Princess Charlotte made sure to inject her personality into one of her dad’s events.

Visiting England’s Lionesses’ training base in Burton-upon-Trent, England, on 15 June, the Duke of Cambridge — who is president of the Football Association — shared a special message from his little girl with the squad.

“Charlotte wanted me to tell you that she’s really good in goal,” he said. “She said, ‘please tell them that.’ Budding star for the future.”

Aspiring Lioness Charlotte and her two siblings, Prince George and Prince Louis, received special gifts from the team’s captain, Leah Williamson: personalised jerseys with their first names and ages printed on them.

Prince William posed with the squad holding up the adorable jerseys after joining the team to take part in some drills and meeting players and staff members for lunch.

This isn’t the first time the Cambridge children have received a personalised football shirt; in May 2022, Prince William received similar gifts from the Heart of Midlothian Football Club in Edinburgh.

The Lionesses will be taking part in this summer’s UEFA Women’s Euro 2022, and Prince William congratulated the team on “inspiring the next generation of women and girls to play football” on the Duke and Duchess of Cambridge’s official social media accounts.

“A major tournament on home soil is an exciting prospect, and it’s clear the players are looking forward to the opportunity to show what they can do,” he posted.

“This squad is already inspiring the next generation of women and girls to play football, reaping the mental and physical benefits of activity. With an exciting summer of football ahead, the whole nation will be cheering you on!”

The Euros’ excitement will kick into high gear on 6 July with the Lionesses playing Austria in their first match.