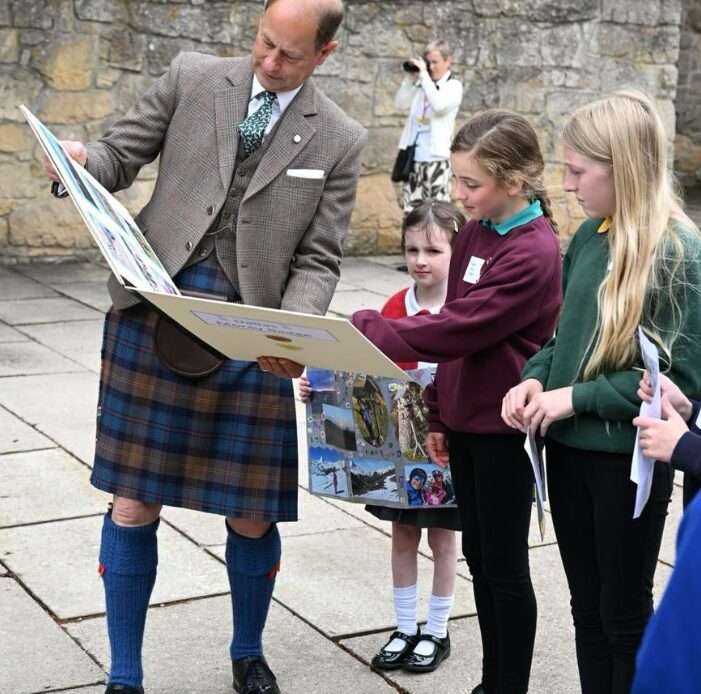 Several members of the Royal Family are in Scotland for Holyrood Week, including The Earl and Countess of Wessex.

Edward and Sophie are known as the Earl and Countess of Forfar in Scotland, and they were in Moray on June 28 2022 to meet with volunteers and celebrate the Platinum Jubilee.

The couple first visited Gordonstoun, Edward and his late father’s alma mater, to present commemorative Moray Badges. There were 125 local children who received the badges after completing challenges in honour of The Queen’s Platinum Jubilee.

The Moray Badge Platinum Jubilee is a challenge created for primary and secondary school students who have been affected by repeated lockdowns over the past two years, and was meant to encourage students to spend time outdoors and to focus on personal growth. The original Moray Badges were established in 1936 by Kurt Hahn, who founded Gordonstoun, and they were the precursor to The Duke of Edinburgh Awards.

After visiting the school, Edward and Sophie then met with volunteers from the Scottish Fire and Rescue Service to present The Queen’s Award for Voluntary Service to members of Gordonstoun’s Fire Service in honour of their volunteer work in the community.

The Earl and Countess also visited Cooper Park in Elgin. They met pupils from Seafield Primary to give them Royal Mint Jubilee coins in honour of their Junior Forester Awards, after unveiling a plaque honouring The Queen’s Green Canopy project.  They then presented Moray Food Plus with a Queen’s Award for Volunteer Service for their community work in Elgin.

To finish off a very busy day, they visited Fochabers Folk Museum and Heritage Centre to present volunteers with certificates honouring their service and to unveil a new commemorative stone.

Holyrood Week normally happens at the end of June to the beginning of July. The Queen and other senior members of the Royal Family visit Scotland to meet with thousands of different people and groups in Scotland to celebrate Scottish achievements, community, and culture. The Queen stays at Holyrood Palace for the week, the Monarch’s official Scottish residence, and holds a garden party on the palace grounds.