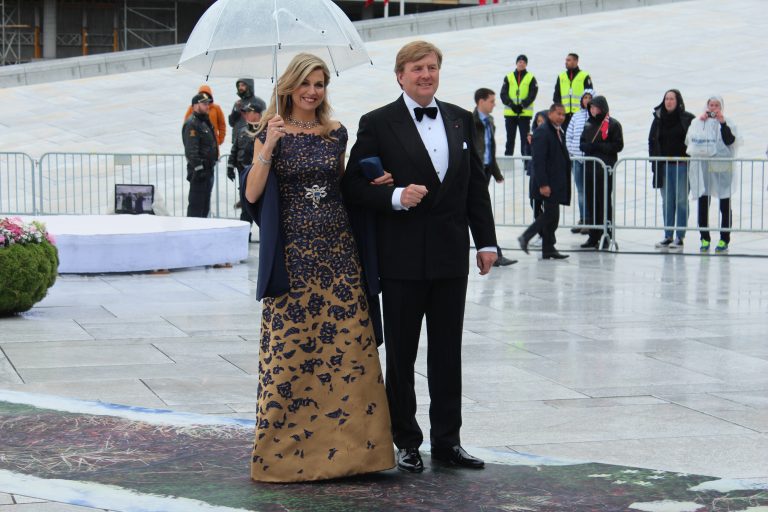 King Willem-Alexander and Queen Máxima of the Netherlands began a very busy State Visit to Austria with all of the traditional engagements of a first day.

They landed in Wien and were welcomed at the airport by many authorities before being escorted to Homburg, the Presidential Palace, where the royal couple were officially welcomed by the President and First Lady of Austria, Alexander Van der Bellen and Doris Schmidauer.

Even before the official welcoming ceremony began, many members of the public had noticed the thoughtful touch in both the King and Queen’s outfits: King Willem-Alexander was wearing a red and white tie, while Queen Máxima sported an all-red ensemble, which, when standing next to the white-dressed First Lady, made the colours of the Austrian flag.

Another, more subtle, homage to the host country was the Queen’s clutch. Modekoningin Máxima reports that the bag is part of the collection designed by Sophie Habsburg, the granddaughter of the brother of the last Emperor of Austria-Hungary. The bag is the Moneypenny style in the colour Ferrari, a bright red that perfectly matched the rest of Queen Máxima’s outfit, which included a dress by favourite Natan and a hat by Fabienne Delvigne.

After the traditional military review and photo opportunity, the two couples entered the Presidential Palace for a private lunch.

In the afternoon, the presidential and royal couples travelled to Ostarrichi Park, where the two heads of state laid wreaths at the feet of the Namur Monument, dedicated to all those who lost their lives during World War II.

King Willem-Alexander and Queen Máxima were then given a tour of the memorial erected to commemorate all those who lost their lives because of the Holocaust, a topic that is also very prominent in the Netherlands’ history.

The two heads of state were then briefly separated as the Dutch King and Queen visited Wien’s Mayor, Michael Ludwig, and the Deputy Speaker of the Austrian Parliament, Doris Bures.

The evening, as usual, concluded with a state dinner, during which both the President and the King gave speeches, highlighting the many things that unite their two countries.

King Willem-Alexander said: “Together we believe in freedom, in humanity, in respect for the law and in peaceful cooperation. […] It is important to express our solidarity and unity right now. Let’s amplify the positive power we have together.”

The visit will conclude on Wednesday, 29 June, and the last two days will be focused on “sustainable mobility, connected society and cultural exchange,” which is why the King and Queen are travelling accompanied by the Minister of Foreign Affairs Wopke Hoekstra, the Minister of Public Housing and Spatial Planning Hugo de Jong and the State Secretary for Infrastructure and Water Management Vivianne Heijnen.