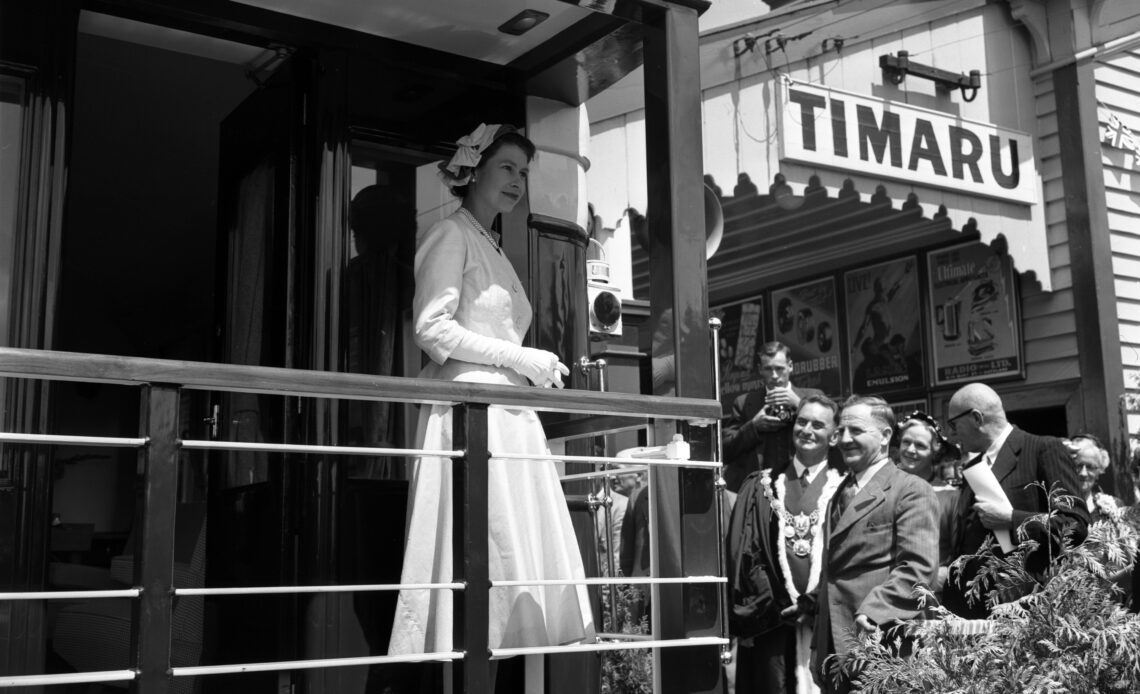 The story of how Queen Elizabeth II came to the throne—that she went up a tree a princess and climbed back down a queen—and the aborted tour of Australia and New Zealand by way of Kenya that had to be postponed is well-documented. But what of her first official tour as The Queen?

In late 1953, The Queen and the Duke of Edinburgh embarked on a Commonwealth Tour that would see them visiting 13 Commonwealth realms, travelling over 44,000 miles, and making her the first Monarch to visit Australia and New Zealand.

A tour of Fiji and Tonga ensued from 17-20 December before the couple arrived in New Zealand, making her the first Monarch to visit the realm.

The Queen and Prince Philip spent Christmas in New Zealand, with The Queen recording her Christmas message from Government House in Auckland. She said: “My husband and I left London a month ago, but we have already paid short visits to Bermuda, Jamaica, Fiji and Tonga, and have passed through Panama. I should like to thank all our hosts very warmly for the kindness of their welcome and the great pleasure of our stay.

“In a short time we shall be visiting Australia and later Ceylon and before we end this great journey we shall catch a glimpse of other places in Asia, Africa and in the Mediterranean.

“So this will be a voyage right round the world – the first that a Queen of England has been privileged to make as Queen. But what is really important to me is that I set out on this journey in order to see as much as possible of the people and countries of the Commonwealth and Empire, to learn at first hand something of their triumphs and difficulties and something of their hopes and fears.

“At the same time I want to show that the Crown is not merely an abstract symbol of our unity but a personal and living bond between you and me.”

The Queen and Prince Philip were in New Zealand until 30 January 1954, arriving in Australia for an eight-week tour on 3 February. According to the State Library of New South Wales, in their 58 days touring Australia, they visited 57 towns and cities.

After leaving Australia on 1 April, The Queen and Prince Philip travelled to the Cocos Islands, arriving on 5 April.

From 10-21 April—The Queen’s birthday—they visited Ceylon (now Sri Lanka) and on 27 April they visited Aden. The couple then spent the final days of April in Uganda before touring Malta from 3-7 May and wrapping up the Commonwealth Tour in Gibraltar on 10 May.

The Queen and Prince Philip arrived back in London on 15 May 1954 aboard the Royal Yacht Britannia, greeting their young children, Prince Charles and Princess Anne, at the dock.

The Queen would celebrate her Silver Jubilee in 1977 with another break-neck Commonwealth Tour that saw her and Prince Philip visiting 14 countries including Western Samoa, Tonga, Fiji, New Zealand, Australia, Papua New Guinea, Canada, the Bahamas, the British Virgin Islands, Antigua and Barbuda, and Barbados.

The Prince of Wales and the Duchess of Cornwall visited Australia, Canada, New Zealand, and Papua New Guinea. The Duke and Duchess of Cambridge visited Tuvalu, the Solomon Islands, Malaysia and Singapore.

The Earl and Countess of Wessex visited Antigua and Barbuda, Barbados, Saint Kitts and Nevis, Saint Lucia, Saint Vincent and the Grenadines, Trinidad and Tobago, Gibraltar, and Montserrat. The Princess Royal visited Mozambique and Zambia.