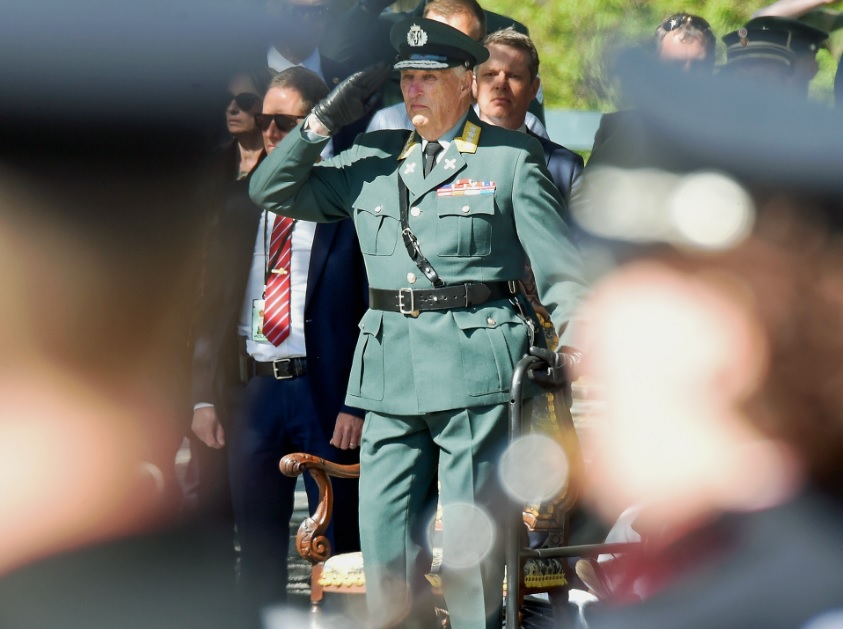 After two years of pandemic restrictions, the public was finally able to participate in the celebration of the Norwegian Liberation and Veterans Day.

Nevertheless, the war in Ukraine left its mark on the day that was commemorated on May 8th 2022 with both His Majesty King Harald and His Royal Highness Crown Prince Haakon present. The royals were present during the main celebration at Akerhus Fortress in the capital of Oslo. The day was celebrated in all Norwegian cities.

Several thousand spectators had turned up at the fortress to see the royals. At the fortress there was an open day with stands, gun salutes, concerts and wreath-laying. The day ended with medal awards and a main ceremony in the presence of King Harald.

Immediately after the arrival of the Norwegian King and Crown Prince, four of the Royal Norwegian Air Force’s F-35 fighter jets flew over the fortress area. The audience sang the first verse of Norway’s national anthem before Crown Prince Haakon laid a wreath at the National Monument to the Victims of Second World War. Before the wreath-laying ceremony, the Crown Prince inspected the Armed Forces present at the event.

King Harald congratulated soldiers Lars William Lilleby, Sigve Nærø Innselset and Stian Woll as he presented them with medals for having shown unusual bravery and courage in dangerous operations and combat. Nationally in Norway, 250 medals were awarded to Norwegian veterans on Sunday.

A number of speeches were also given, including by the Norwegian Prime Minister. Most of them referred to the ongoing war in Ukraine which has strongly affected Norway. Norway is one of the few NATO-nations that has a land-border with Russia.

After the liberation on 8 May 1945, Crown Prince Olav was the first Norwegian Royal to return to Norway on 13 May and he took over the military command in Norway. The following day all Norwegian resistance groups dropped their weapons.

King Haakon and the rest of the Norwegian Royal Family arrive safely in Oslo on 7 June 1945. They were welcomed by huge crowds. The streets were decorated with flags and everywhere the Norwegians shouted: “Long live the King.”