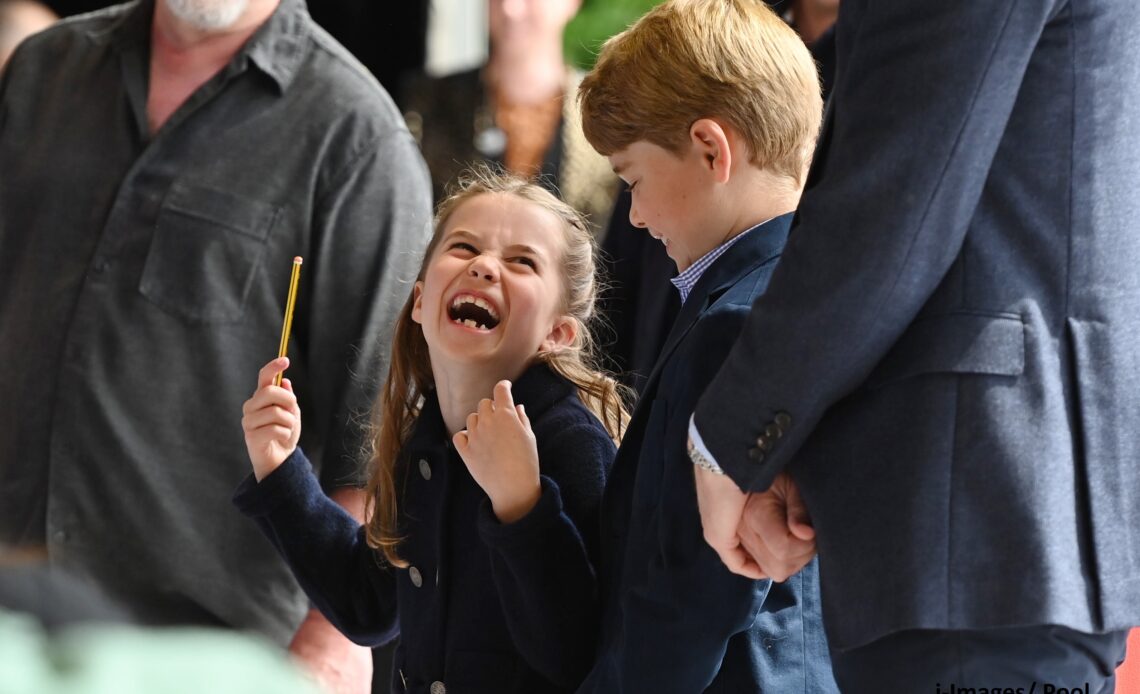 The Duke and Duchess of Cambridge brought along some special visitors during their whirlwind visit to Cardiff on Saturday. Prince George and Princess Charlotte joined their parents to make their first public visit to Wales.

The Cambridges were in Wales to celebrate the Platinum Jubilee and to see preparations for Saturday afternoon’s Platinum Jubilee Celebration Concert on the grounds of Cardiff Castle. During their visit, they met performers and crew, and were treated to drumming demonstrations and a chance to conduct an orchestra.

Speaking to reporters afterwards, drummer Owain Wyn Evans said that Prince George and Princess Charlotte had wanted a drumming lesson but then got too shy when invited to play. “[S]o I did a little drum performance for them,” he said.

“At the time I was dripping in glitter, but they said I actually needed more glitter—so I’m going to try and find some spray glitter for my fringe now.”

Another highlight for the young royals was meeting Shenkin the Fourth, the goat mascot of the 3rd Battalion Royal Welsh Regiment, who also escorts the Welsh Rugby Team at their stadium.

Shenkin the Fourth’s handler, Sgt Mark Jackson, told People magazine that once Prince George heard that he “was even more excited…Both the children were mesmerised by Shenkin.”

The Platinum Jubilee Celebration Concert took place Saturday afternoon. Afterwards, big screens were to be erected so that concert-goers could watch the Platinum Party at the Palace live from London’s Buckingham Palace.

Prince Louis, who made headlines for his animated appearance on the Buckingham Palace balcony for Thursday’s Trooping the Colour flypast, did not join the rest of the family, but royal watchers at Kensington Palace spotted him greeting the family’s helicopter upon return.

William and Kate shared a video of their visit to social media, captioning it, “So lovely to meet the stars and team behind tonight’s concert. We had an extra special drum demonstration for George and Charlotte, saw a stunning performance from the Wales Youth Choir for Good and had a sneak peak at how the show will come together.

“Have a great time!”

The Platinum Party at the Palace at Buckingham Palace features some of the world’s best performers, echoing past concerts at the Golden Jubilee in 2002 and the Dimaond Jubilee in 2012.

Royal attendance has not been confirmed, though William is due to give a speech about The Queen at Saturday night’s event, and Kate is likely to attend alongside him.