Camilla champions women writers on a literary day in London 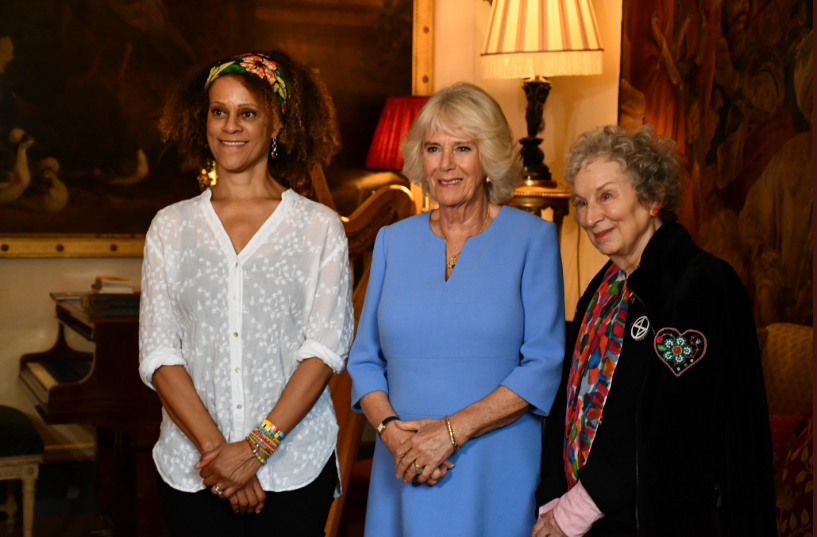 It was a very literary day out for The Duchess of Cornwall on Tuesday as she hosted a tea for the Booker Prize Foundation and its 2019 winners and later attended a reception for the Oscar Wilde Society to celebrate the author’s birth.

Camilla first met with joint winners Margaret Atwood and Bernardine Evaristo at Clarence House. Atwood won for her follow up to The Handmaid’s Tale, titled The Testaments while Evaristo won for Girl, Woman, Other. Evaristo is the first black woman to have won the prize; Atwood, who won previously in 2000, is the oldest winner.

The Duchess of Cornwall has presented the Booker Prize every year since 2013 to authors including Eleanor Catton, Richard Flanagan, Marlon James, Paul Beatty, George Saunders, and Anna Burns, who also attended the reception. However, the Duchess had to miss this year’s event which took place on Monday, the same day as the State Opening of Parliament.

“An avid reader herself, The Duchess believes it is vital to support children and adults alike to develop an interest in reading and writing,” said Clarence House.

“Her Royal Highness promotes this ethos through various patronages, including the Royal Society of Literature, The National Literacy Trust, Book Trust, The Wicked Young Writers Award, Beanstalk and First Story.”

Evaristo told the Belfast Telegraph that meeting Camilla was fun. “She’s very, very funny and very engaged in literature and literature projects,” and expressed her admiration for Clarence House, saying that it has “very nice carpets and pictures.”

Atwood told reporters that Camilla said, “She was very sorry she couldn’t be there and swore that she would be there next year. And said how lucky we are to be writers.”

Later, the Duchess attended a reception hosted by the Oscar Wilde Society at Grosvenor House in London.

The Society ”aims to promote knowledge, appreciation and study of Wilde’s life, personality and works,” per Clarence House and hosts an annual birthday celebration for the author every October.

The guest list was settled using people that Wilde would have known, and included “artists, authors, actors, poets, playwrights, politicians, lawyers, lords, and at least one bishop, from across the UK and Ireland.”

Camilla gave a short toast at the reception, saying, “It’s lovely to be here again to salute the memory of Oscar Wilde.

“Oscar liked strong women and created quite a few in his plays – including, of course, the infamous Lady Bracknell, a character so interesting that now men want to play her – as if they didn’t have enough good parts of their own.

“As he put it in De Profundis: ‘With freedom, books, flowers, and the moon, who could not be happy?’

“Ladies and gentlemen, I now ask you to raise your glasses and drink to the memory of the author, playwright and poet Oscar Wilde.”