Arlene Foster, Clare Balding and Rio Ferdinand amongst those honoured by The Queen 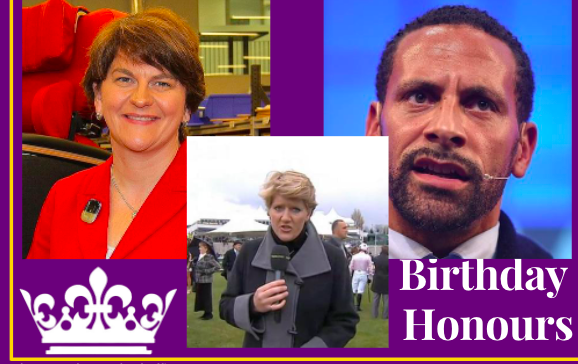 The former First Minister of Northern Ireland, Arlene Foster, is amongst the famous names to feature prominently in the 2022 Birthday Honours List, released on the eve of the Platinum Jubilee celebrations.

Foster receives a Damehood for political and public service, having led the Democratic Unionist Party from 2015 to 2021.

Meanwhile, Stephen Timms MP has been knighted, whilst Tracey Crouch MP is awarded a CBE.

In the world of broadcasting, Clare Balding has been awarded a CBE for services to sport and to charity.

Balding has been the BBC’s lead sporting presenter for many years, and was formerly the race of horse racing in the UK, having led coverage of The Derby, Royal Ascot and the Grand National for many years.

Chefs and Masterchef judges John Torode and Gregg Wallace have each been awarded an MBE for services to food and to charity.

Actress Pauline Quirke also receives an MBE for services to young people, to entertainment, and to charity.

In the world of sport, former footballer Rio Ferdinand receives an OBE for services to Association Football and to charity.

Moeen Ali is awarded an MBE for services to cricket.

This List also awards three Companions of Honour – of which there are only 65 recipients at any time – to author Sir Salman Rushdie, for his services to literature; Sir Quentin Blake, for services to his illustration; and Dame Marina Warner, for her services to the humanities.

Prime Minister Boris Johnson said: “This historic Platinum Jubilee is not only a celebration of the monarch but of the qualities she possesses. The honours she confers this week reflect many of those qualities that have been invaluable from all different walks of life and to communities across the UK.

“I pay tribute to all of this year’s winners. Their stories of courage and compassion are an inspiration to us all.”