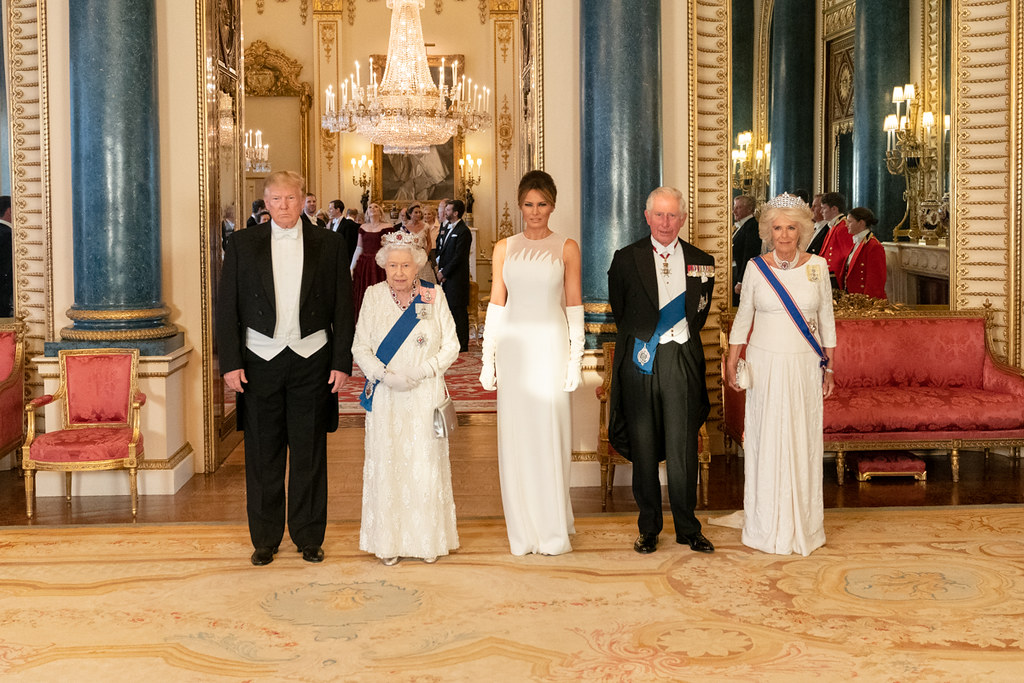 The British Royal Family counts many spectacular diamond tiaras among their collection. So many, in fact, that we had to split this post into two parts to highlight 10 of their best diamonds. Read on for the first part!

Girls of Great Britain and Ireland

The Girls of Great Britain and Ireland Tiara, so named for the girls across both countries who pooled their money together to purchase this tiara for the future Queen Mary on her wedding day in 1893, is a favourite of Queen Elizabeth II.

Lady Eva Greville helped commission this tiara, which features diamonds in both fleur-de-lys and festoon designs. It initially had pearls as well, but Queen Mary had them removed, along with a bandeau element. In 1947, she gave it to her granddaughter, Elizabeth, on her wedding day.

Queen Elizabeth has a particular affinity for the Girls of Great Britain and Ireland Tiara – she even calls it Granny’s Tiara – and has worn it frequently throughout her reign. Of late, it’s one of the few tiaras she still wears with regularity, and it’s one that most people associate with her, having appeared in plenty of her official portraits.

King George VI purchased this delicate tiara in 1936 as an anniversary present for his wife, Queen Elizabeth. Made by Cartier, this diamond tiara features scroll motifs and studded diamonds. Queen Elizabeth only ever wore it publicly prior to becoming the queen and gave it to her daughter in 1944 as an 18th birthday present.

Queen Elizabeth II never publicly wore the tiara either, but she has loaned it out to several family members, including Princess Margaret, who wore it on her sister’s coronation day in 1953; and Princess Anne, who wore it frequently in the 1970s. Its last wearer is a future queen.

Then-Kate Middleton wore this tiara on her wedding day in 2011 – the only time she’s ever worn it, and the last time we’ve seen it publicly worn. Since then, it has been on display (first at Buckingham Palace with Kate’s wedding dress, but also in Cartier exhibits around the world) and otherwise back in the vaults.

Created in 1911 by Queen Mary for the coronation of King George V as Emperor of India (and herself as Empress), the royal jewel-lover dismantled another tiara (the Boucheron Loop Tiara) for Garrard to create this stunning and opulent piece.

Dripping in diamonds, the Delhi Durbar Tiara is composed of s-shaped and lyre-shaped diamonds set in white gold and platinum. The diamonds themselves were originally mined in South Africa and given to Queen Mary in 1901. Diamond festoons top the tiara, which is also entirely closed in a circlet – meaning it wraps around the entire head, it doesn’t nestle into the hair.

Queen Elizabeth The Queen Mother wore this during her time as queen consort and kept it in her possession throughout her life. It wasn’t until 2005 that it reappeared in public on the head of the Duchess of Cornwall – its last public appearance.

This unique honeycomb diamond tiara dates back to the 1920s when it was created by French jewellers Boucheron. Its original owner, Mrs Greville, had the tiara made out of an older Boucheron tiara that dated to the coronation of King Edward VII in 1901. Upon her death in 1942, she bequeathed her jewels to Queen Elizabeth.

In the 1950s, The Queen Mother had additional diamonds added to the top of the tiara and began to wear this with increasing regularity (The Queen Mother only wore two tiaras in her later years). Upon her death in 2002, The Queen Mother passed this on to her daughter, who has since loaned it out to The Duchess of Cornwall, who wears it regularly.

Queen Mary, ever the magpie, had this diamond tiara made in 1932 to highlight the brooch given to her on her wedding day in 1893 by the County of Lincoln. The tiara is unique in that it’s made up of eleven sections, all of which feature interlocking oval designs and smaller, circular diamonds. In the centre, the County of Lincoln brooch, though Queen Mary was known to swap it out for other brooches.

Upon her death in 1953, the tiara, like the rest of her jewellery collection, was bequeathed to her granddaughter, and it hadn’t been seen on any royal in decades before The Duchess of Sussex wore it on her wedding day in 2018.