A look at the history of the Royal Garden Party 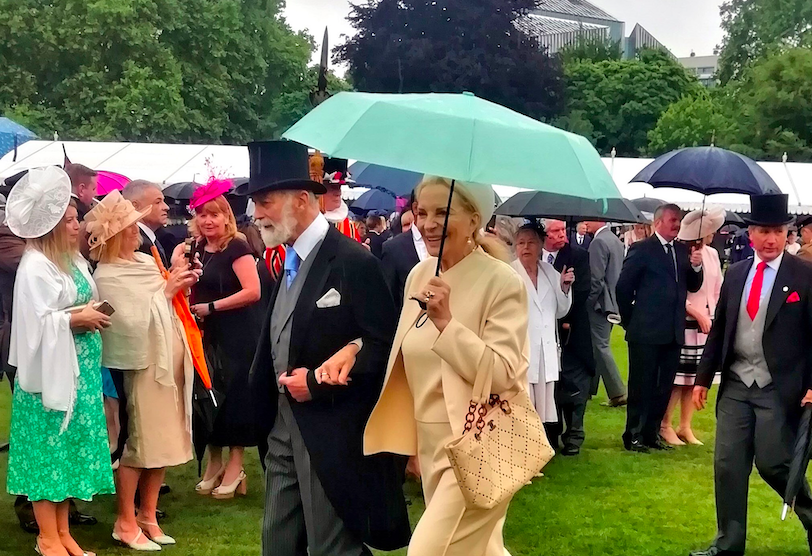 Each year, Buckingham Palace holds three garden parties in May, allowing ordinary citizens the opportunity to rub shoulders with royalty. While this year’s events were cancelled due to the global coronavirus pandemic, Royal Central is sharing the history behind Queen Elizabeth’s ‘favourite’ royal event.

Each May, Buckingham Palace throws open the gates and allows 30,000 specially selected normal citizens the chance to enjoy their beautiful gardens and a spot of afternoon tea beside members of the British Royal Family.

It is estimated by the end of each lavish spring afternoon affair, 27,000 cups of tea, and 20,000 finger sandwiches and equal amounts of cake have been enjoyed.

The lucky recipients of these highly coveted invites are selected to attend as a way to ‘recognise and reward’ public service.

British Citizens are selected to attend by their Lord Lietunet, who is the monarch’s representative in each county, and are chosen for their contribution to society through charity work or public service.

Countries within the Commonwealth are also allocated a select number of invites to distribute among their citizens.

“Garden parties are an important way for the Queen to speak to a broad range of people from all walks of life who have made a positive impact in the community,” explains the Monarchy’s official website.

However, this wasn’t always the case. When garden parties began to first be held in the 1860s during the reign of Queen Victoria, they were exclusive affairs open to the cream of society only.

The first garden party held by Victoria was called a ‘breakfast’, however it was hosted in the late afternoon as current garden parties are.

The guest list included members of the upper classes only such as other royals, nobles, and government officials.

As Victoria grew reclusive following the death of her husband Prince Albert, the ‘breakfast’ events were also used to present debutantes to society. This practice would continue until the 1950s.

Change commenced under the reign of George VI. As the monarch in the post WW2 era, members of defence and essential services began to be invited as a reward for their service, along with the upper crust crowd.

But it was under the reign of our current queen that garden parties would truly be revolutionised.

In a moment of history immortalised in season 2 of the Crown, the progressive change took place after Lord Altrincham (who was later known as John Grigg after he disclaimed his title in 1963) gave the queen a very public dressing down and suggested she and her courtiers were out of touch with modern-day Britain.

Following this dramatic turn of events, several changes were made, starting with the first broadcasted Christmas speech that December. The other major change was that ‘presentation parties’ were replaced by more accessible ‘garden parties’ which included a broader range of people.

From time to time, a garden party has also been held with a special theme.

One such occasion includes a 1997 event which was held in the year that Queen Elizabeth and Prince Phillip celebrated their 50th wedding anniversary. Others attending the garden party were also celebrating the milestone anniversary that calendar year.

In 2002, while Elizabeth celebrated her golden jubilee, one garden party was made of invitees who were born on the 6th of February, 1952, her accession day.

While a larger cross-section of the public is invited, garden parties are still a special occasion and attendees are expected to dress appropriately. Men are required to wear morning dress and women wear a dress with a hat or fascinator. Military uniforms and national dress are also deemed appropriate attire.

Each event is attended by Queen Elizabeth and a smattering of royals will support her.

The Duchess of Sussex made her royal debut at a garden party in May 2018.

Regular attendees include Prince Charles and the Duchess of Cornwall, the Duke and Duchess of Cambridge, the Earl and Countess of Wessex and Princess’ Beatrice and Eugenie.

The gates of the palace are opened to those lucky enough to have an invitation at 3 pm, however, the royal family does not arrive until 4 pm.

This allows attendees the opportunity to smoothly transition through security, enjoy a cup of tea and a mouthwatering cake or scone, and enjoy the immaculately maintained sweeping gardens surrounding the palace.

The Royal family will arrive as a military band plays God Save The Queen.

After this, the royals will disperse amongst the crowd to greet guests on their way to the royal tent.

Ushers at the start of the event will strategically place pre-selected guests on the route.

The party concludes with the monarch making a speech to those in attendance.

A press release issued by the palace at the time of the cancellation of the 2020 garden parties stated invitees will receive an invite to next year’s event.