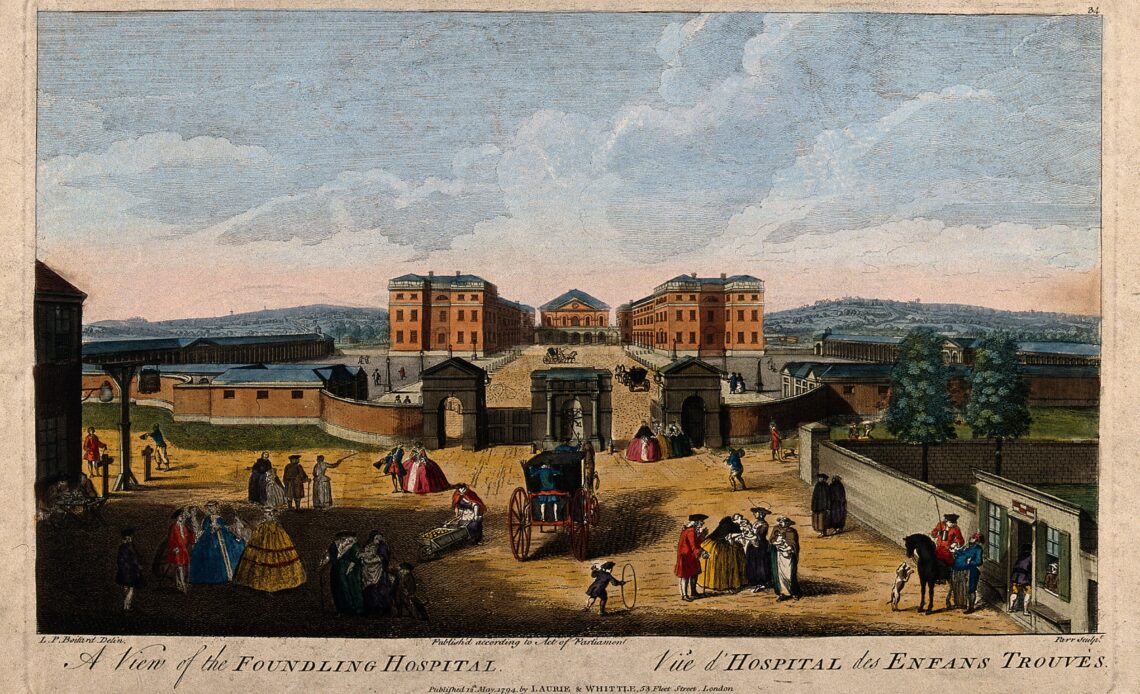 The Duke and Duchess of Cambridge marked their first official engagement of 2022 at the Foundling Museum, which highlights and tells the story of the 18th-century Foundling Hospital, the U.K.’s first children’s charity. With the Duchess now patron of the museum, Royal Central is taking a look at its royal connection that dates back centuries.

Founded by the philanthropic sea captain Thomas Coram, The Foundling Hosptial in London was established to care for babies at the risk of abandonment. After 17 years of campaigning, Coram received a Royal Charter from King George II in 1739 to go on and establish the hospital.

Babies were first admitted in 1741 in a temporary house located at Hatton Garden. At first, there were no questions about a child or parent. Instead, children were identified using different tokens like marked coins, fabric, or notes written on scraps of paper. This would change in 1758 when Hospital Governors decided to provide receipts to anyone leaving a child, thus making the identification tokens unnecessary.

In 1742, stone for the new hospital was laid on land acquired from the Earl of Salisbury on Lamb’s Conduit Field – an undeveloped area north of Great Ormond Street and west of Gray’s Inn Lane. In 1756, with the hospital built, the House of Commons decided all children offered should be received, and local receiving places should be appointed all over the country. The hospital became a very fashionable charity supported by many notable figures, including portrait painter and cartoonist William Hogarth.

In the 1920s, the hospital moved to a countryside location. A proposal to turn the buildings over for a university fell through, and they were sold to property developer James White. Residents opposed his plan to transfer Covent Garden Market to the site, and in the end, the original hospital building was demolished.

Between 1935 and 1937, the Tomas Coram Foundation (now known as Coram) built a new headquarters on the property and incorporated architectural features and Rococo interiors from the original hospital building. The Foundling Museum was established as a separate charitable organisation in 1998.

The Foundling Museum opened its doors in 2004, and the Duchess became patron in 2019. The acceptance of the patronage followed a previous visit to the museum in 2017 when the Duchess met children who had benefited from the museum’s work on the transplant wards at Great Ormond Street Hospital, part of a programme for pre-school children from local nurseries.