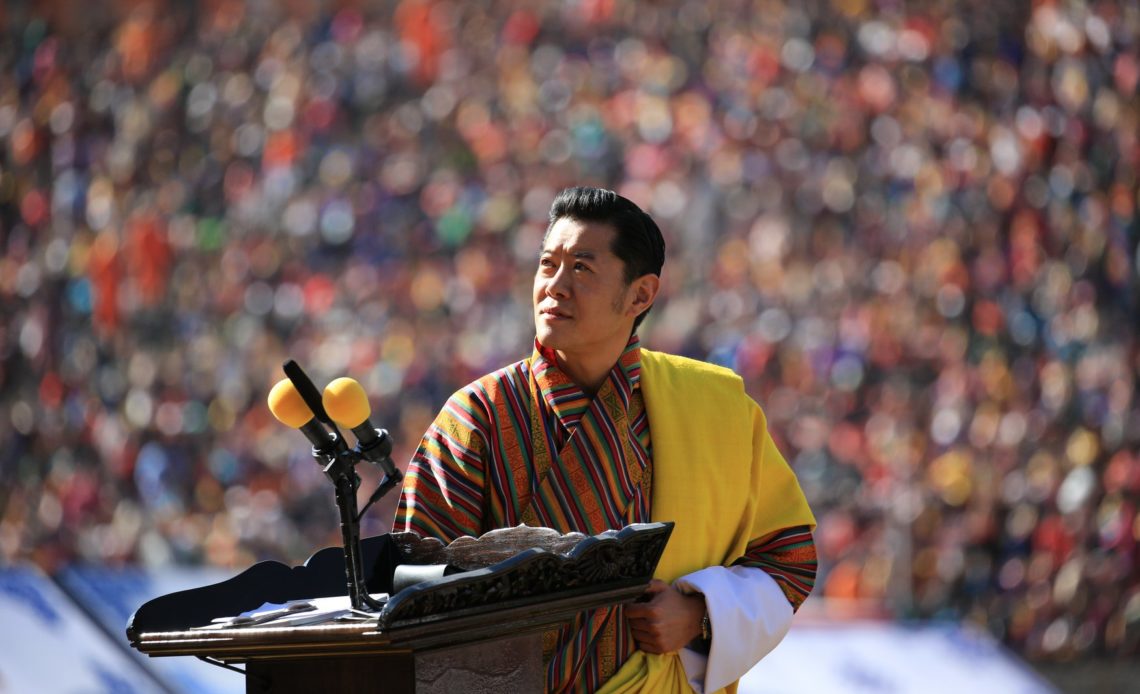 Jigme Khesar Namgyel Wangchuck was born on 21 February 1980 in Kathmandu, Nepal, to King Jigme Singye Wangchuck and his third wife, Queen Ashi Tshering Yangdon (the current Queen Mother). He has one older sister, Princess Chimi Yangzom Wangchuck (b. 1980) and eight younger siblings (four sisters and four brothers). His father has four wives, and as such, the King only has one full sister and one full brother.

He graduated from Yangchenphug High School before entering Phillips Academy Andover in Massachusetts, USA and later transferring to the Cushing Academy in the same state. He graduated from Cushing and then attended Wheaton College in Massachusetts for a time before completing his university education in the Foreign Service Programme and International Relations at Magdalen College, University of Oxford. He is known to speak his native Dzongkha and English.

His Royal Highness was officially made Crown Prince of Bhutan on 31 October 2004; then, his investiture as the 16th Trongsa Penlop (similar to the Prince of Wales in the UK or Princess of Asturias in Spain) took place as did his formal declaration as the Crown Prince.

During his time as the heir to the throne, he travelled alongside his father throughout Bhutan to meet the people and even addressed the UN General Assembly in 2002 as the representative of Bhutan. He also attended the late King Rama IX of Thailand’s 60th-anniversary celebrations in 2006 in Bangkok.

King Jigme Singye Wangchuck announced his intent to abdicate in December 2005, saying that he would give up the throne in 2008. A year later on 9 December 2006, he issued a Royal Edict that announced his abdication and made Jigme Khesar Namgyel Wangchuck King of Bhutan.

The new monarch had his coronation on 6 November 2008 with various religious ceremonies in the Bhutanese capital. As part of his coronation, he vowed he would not rule the people of Bhutan but would care for them as a father.

His Majesty has helped see through the final democratisation of Bhutan during his reign and saw the Constitution of Bhutan adopted in July 2008 by the country’s first elected parliament. He has also helped strengthen relations with India and signed a new treaty of friendship with the country in 2007.

The beloved King’s first big project was the National Cadastral Resurvey which was to resolve issues of excess land that had been impacting each Bhutanese household for years. Land reform in the country was the result of the project with the resettlement of people from less accessible areas to villages. Those people were assisted by the government with basic amenities as part of the move.

On 20 May 2011, King Jigme Khesar Namgyel Wangchuck’s engagement to Jestun Pema was announced by the King at the opening of Parliament. They married on 13 October 2011 at Punakha Dzong with public celebrations later in Thimphu and Paro. Although polygamy is legal in Bhutan and his father has many wives, the King vowed to never marry another woman.

Four years later, on 11 November 2015, the couple announced they were expecting their first child. The Queen gave birth to a son – the new crown prince – on 5 February 2016, with the King present, in Lingkana Palace. The baby’s name was announced as Jigme Namgyel Wangchuck on 16 April 2016.

During the National Day celebrations on 17 December 2019, His Majesty announced that Queen Jetsun Pema was expecting their second child, due in the spring of 2020.