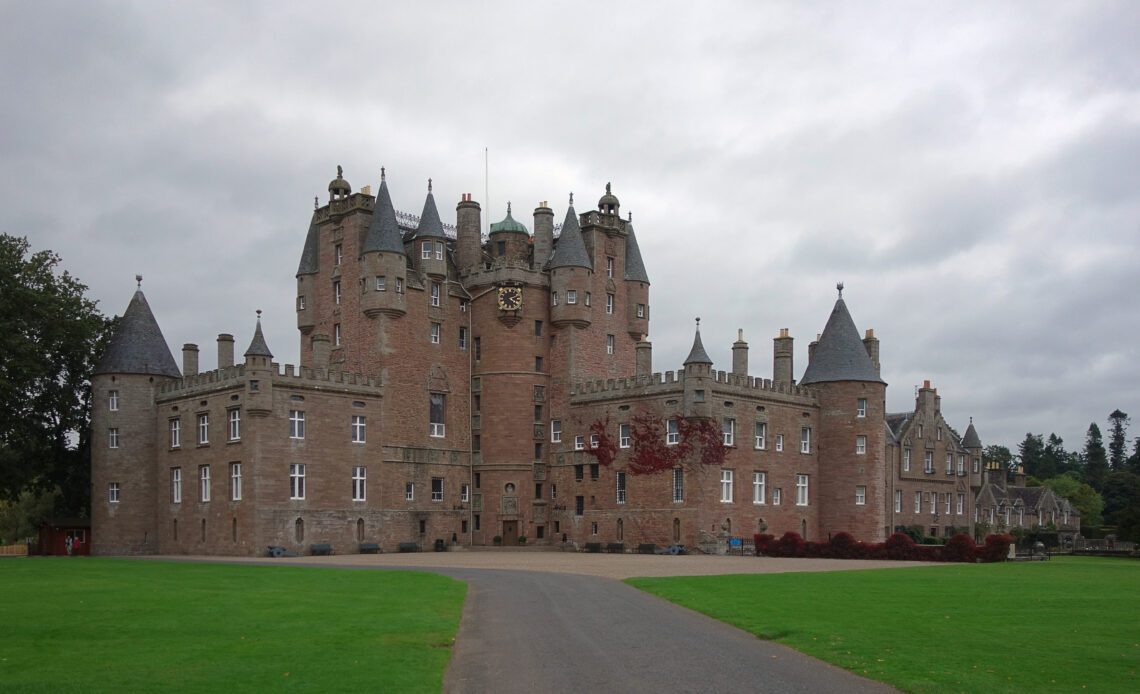 Glamis Castle is steeped in history. Located in Angus, Scotland, it has been the seat to the Earls of Strathmore and Kinghorne and home to the Lyon family since the 14th century. An author you may have heard of, William Shakespeare, used it as inspiration for “Mac, err, “the Scottish play.” 2020 has been crazy enough, let’s play it safe and not tempt fate.

Many of you may know it as the childhood home of Lady Elizabeth Bowes-Lyon, better known as, Queen Elizabeth, The Queen Mother. Princess Margaret was also born at Glamis Castle.

The legend and lore surrounding the castle could fill a book. It is rumoured to be the most haunted place in Scotland. In fact, supernatural events are thought to have begun before the castle was even built.

Originally meant to be built on a nearby hill, every morning when the builders arrived they found stones scattered, broken and their work destroyed. Then one day, a voice was heard saying: “Build not on this enchanted spot, where man hath neither part nor lot, but build down in yonder bog, where it will neither shake nor shog!” And with that, the building site was moved to a flatter section of land.

It has been reported that this apparition has been seen wandering the grounds, pointing to her face with blood spilling out of her mouth. Legend says it is a maid who discovered a terrible secret that only the Earl knew. When she said she would share the secret, he ordered the guards to cut out her tongue and then had her killed.

Another woman said to haunt the castle is Lady Janet Douglas, wife of the sixth Lord of Glamis, John Lyon. She was accused of practising witchcraft against King John V of Scotland. Through the false testimonies of many witnesses, she was convicted and burned at the stake in 1537. Today, she is thought to be The Grey Lady, who is often seen in the family chapel.

Alexander Lindsay, fourth Earl of Crawford, aka “Earl Beardie” doesn’t limit himself to haunting one part of the castle. It is said he was an infamous drinker and gambler. One night he was playing cards, and his friend wanted to stop because it was the Sabbath. When his friend and the servants refused to continue the game, Earl Beardie reportedly said he wanted to keep playing even “if it is with the Devil himself.” At midnight, the Devil appeared in disguise, and after some commotion, Beardie is said to have lost his soul in a card game. Beardie is still heard behind closed doors, yelling, swearing and rattling dice.

He is also thought to don a suit of armor and lean over people sleeping in their beds.

Secret chambers are key to two of the most famous Glamis Castle ghost stories.

Ogilvy clan In 1486, the Ogilvy Clan, were hiding from the Lindsay Clan and wanted to hide in Glamis Castle. Lord Glamis allowed them in and hid them in a secret chamber. Being a friend of the Lindsays, the Earl locked the door and walked away, leaving the Ogilvy’s to die. Years later, noises were heard from behind the now walled-up room. It was then that the skeletons were discovered. Today, people feel unease in the room.

Monster of Glamis Thomas Bowes-Lyon, the oldest son of the 11th Earl of Strathmore, is thought to be the “Monster of Glamis.” Born badly-deformed on October 21, 1821, records show he died this same day. But many believe that he survived, but the family kept him out of sight because he was so “unpresentable” and was removed from the line of succession. He was only allowed out at night for fresh air and exercise, walking along the roof, parapets and grounds. Thomas is thought to haunt the grounds and a section of parapets known as “The Mad Earl’s Walk.” Thomas is rumoured to have lived until the 1920s, and when he died, his rooms were walled off, and people still have not found them. To this day, if you count the number of windows on the outside of the castle and compare that to the number of windows you can access from the inside, you will come up two windows short.