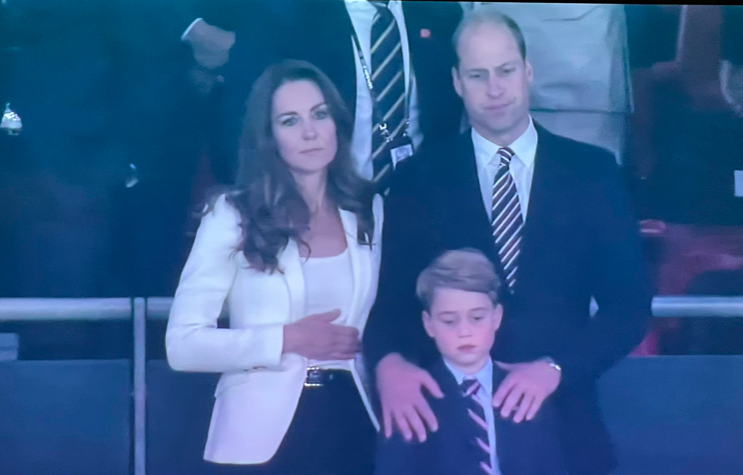 Royal Central’s Deputy Editor, Brittani Barger, calls out a torrent of abuse directed at Prince George following an agonising defeat for England in the European Championships final at Wembley on Sunday.

After the Euro 2020 final match on Sunday, I tweeted a photo of the Cambridge Family when England lost the match to Italy in penalty shootouts. The sadness on little Prince George’s face represented what many in England fans were feeling at the time – agony and desperation.

While many offered kind comments and related to the young royal, others chose it as a moment to spew hate at and make fun of a child.

I’m not going to theorise why these people chose to do what they did or pinpoint the groups that did it, as that will only give them the attention they were seeking.

Prince George is a seven-year-old little boy, who yes, is a prince and public figure, but he is still a child who was watching an amazing football match with his parents on Sunday night.

Comments made were “spoiled kid gets everything he wants, now learns real disappointment,” “LMFAO,” “I hope his brother is wearing an Italy jersey,” “Haha, don’t care, stay mad,” “We love to see it” etc. One even used a photo of another member of the Royal Family’s face with Italian flags painted on her cheeks in an effort to mock him.

Of course, these comments weren’t just limited to what I shared. There were remarks on many people’s posts who said something about how sad he looked at the loss.

Even if people aren’t getting along within the Royal Family, I doubt they would be happy seeing their young relative so sad on the television. After all, he is an innocent child. He can’t help the family he was born into or the position he holds. He can’t help what other members of his family do and say, and yet people choose to attack him and make fun of him, thinking they are getting somewhere or making a point.

If this was your child, would you want people saying these things to them? I doubt you would. So why do it to another child like George in this case or Archie, Charlotte, or Lilibet in other cases?

It is rather sad that people have sunk to a low that they think mocking a child is fun and that the child deserves it. Let’s leave the royal children alone, shall we?