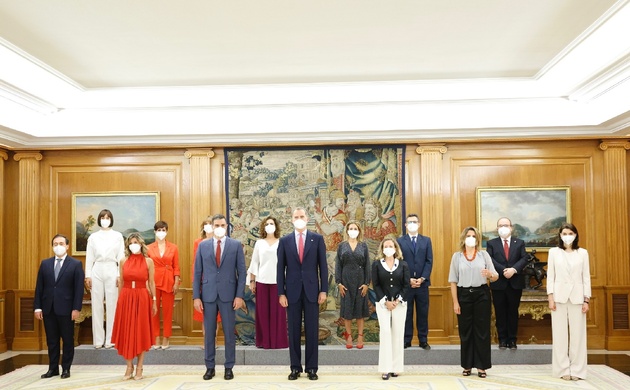 After a weekend filled with sports events, Europe woke up on Monday with institutional tasks left to do.

First up was King Felipe – the Spanish monarch presided bright and early the swearing-in of 12 new ministers of the government.

After 16 months in a deep economic recession due to the sudden crisis the world faced, Spanish Prime Minister Pedro Sanchez decided to make some changes to the composition of his government to have more people focusing on the economic reprise.

The Minister of Education and Professional Training, Isabel Celàa, was also replaced with Pila Alegría now taking on the role and the Minister for the Presidency, Relations with the Courts and Democratic Memory was changed (it was divided between two people, José Antonio Mortilla for the Presidency and Relations with the Courts and Fernando Martínez Lopez for the Democratic Memory. They have now been reunited under the direction of Félix Bolaños). Additionally, the Minister of Territorial Politics is Isabel Rodríguez, the Minister for Culture and Sports is now Miquel Iceta, and the Minister for Science and Innovation is now Diana Morant. Finally, María Jesus Montero also got sworn in because she added the Ministry of Public Functions to her role as Minister of Treasury, which she already had and will retain.

All new ministers swore under the attentive eye of His Majesty and the Prime Minister, Pedro Sanchez, on a facsimile of the Constitution edited by the Spanish parliament in 1980. The volume was opened on Title IV, which talks about the Government and the Administration – specifically, on the page of article 100, which states that “the other members of Government will be nominated and separated by the King on the advice of the President of the Government” [aka, the Prime Minister].

His Majesty was later joined by Queen Letizia for a trip to Roncesvalles, Navarra, to commemorate the Xacobean Year 2021-2022.