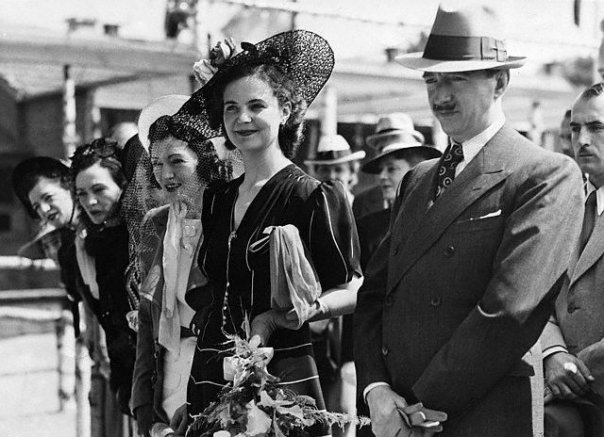 Queen Geraldine occupies a unique position in Albanian history: she’s the only queen consort in modern times, and she reigned alongside her husband for less than a year before they had to flee an Italian invasion.

Though she spent the rest of her life zigzagging the world, trying to find a place to settle, Queen Geraldine never gave up promoting her son’s interests as an uncrowned king.

Let’s look at the life of Queen Geraldine of the Albanians.

The family lived in Budapest until Geraldine turned three when they moved to Switzerland after the fall of the Austro-Hungarian Empire. The family returned to Hungary in 1921, but after her father’s death in 1924, Geraldine’s mother packed her and her two sisters up and moved to Menton, France.

Her mother remarried and the children were sent to a boarding school near Vienna, Austria, and Geraldine began to support herself as the family’s fortune had dwindled. In the late ‘30s, she worked as a shorthand typist and as a seller in the gift shop of the Budapest National Museum. But queendom was right around the corner for Geraldine.

The Path to Queenship

While Geraldine was working and making a name for herself in Hungarian society, over in neighbouring Albania, President Amet Bej Zogu proclaimed himself King Zog I of Albania, and he needed a bride to stabilise this new royal family. He urged his sisters to travel around Europe to find a suitable bride.

Geraldine entered the picture…literally. His sisters travelled around taking photographs of women they thought would be suitable and sent back a picture of Geraldine. When King Zog saw her photo, he deemed her worthy of being his queen, and Geraldine was summoned to Albania to meet him.

Preparing for a Crown

Geraldine met her future husband in December 1937, mere days before their engagement. After their engagement was announced, Geraldine was styled Her Royal Highness Princess Geraldine of Albania and was given the nickname ‘The White Rose of Hungary.’ She didn’t speak Albanian, knew next to nothing about her new country, and was left out of discussions with her husband. She was also 20 years his junior.

Their wedding took place in the presence of Italian dignitaries, including the envoy of then-Prime Minister Benito Mussolini, and they drove to their honeymoon in a scarlet Mercedes-Benz 540 gifted to them by Adolf Hitler. The threat of war loomed constantly, and Queen Geraldine would spend less than a year in her role.

By all accounts, Queen Geraldine thrived in her role as queen consort. According to the Albanian Royal Family’s website, she “contributed in the building and the functioning of the institutions such as hospitals, asylums and orphanages” and was “fully committed to the promotion of women’s rights as well as their emancipation.”

And she helped create and promote Radio Tirana and prioritised “the introduction to Albanian society of values, and a better way of life, especially in the rural areas” of the country.

Queen Geraldine was just shy of reaching a full calendar year as the queen consort of Albania when Italy invaded the country the following April and the Royal Family—which now comprised King Zog, Queen Geraldine, and their only child, three-day-old Crown Prince Leka Zogu, born 5 April—fled the country.

Italy’s King, Vittorio Emanuele III, was declared the King of the Albanians by Parliament, but he abdicated the role in 1943.

The royals escaped, travelling through Greece and Turkey before settling in France and England, where they spent most of the Second World War. Their address was once the Ritz Hotel in London, but they spent more time in Buckinghamshire. Following the war, the royals left for Egypt and then France, again, where they settled for the rest of King Zog’s life.

King Zog had been re-declared King of the Albanians following Vittorio Emanuele’s abdication, but when the socialist People’s Republic of Albania came into control in 1946, his title was once again stripped.

The End of the Story

In 1961, King Zog passed away, and Queen Geraldine’s son was proclaimed King Leka I in a Parisian hotel room by the exiled royalist Albanian government, though he never ruled as the official head of state.

Queen Geraldine now preferred to call herself The Queen Mother of Albania, and the Royal Family continued travelling, settling, in turn, in Spain, Rhodesia (now known as Zimbabwe), and South Africa, where Queen Geraldine would spend the rest of her life.

The family had been barred from returning to Albania while it was ruled by communism, though in 1997, Queen Geraldine and Crown Prince Leka returned to Tirana for a referendum to decide if the monarchy should be restored. The referendum failed, with only 30% of Albanians in support of a monarchy, and the country remained a republic.

In her final years, Queen Geraldine returned to Albania for the final time, settling in Tirana. Ill health plagued her, and she was admitted to a military hospital for treatment for lung disease. She suffered three heart attacks, with the final one being fatal.

Queen Geraldine passed away on 22 October 2002 surrounded by her family, Crown Prince Leka and his wife, Queen Susan. She is buried in the Royal Mausoleum in Tirana.