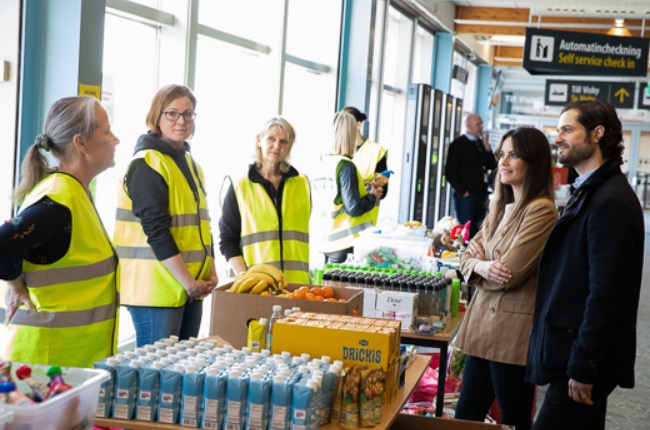 The war in Ukraine has forced millions of people to flee their homes. While most have travelled to neighbouring countries such as Poland, Romania and Moldova, refugees are now beginning to arrive in European nations further away from the war, including Sweden.

Prince Carl Philip and Princess Sofia began their visit by talking to representatives of Nynäshamn municipality. They heard that 200-300 Ukrainian refugees arrive in Nynäshamn daily via ferries from Poland. Many of the refugees continue to travel, but the municipality is responsible, on behalf of the Swedish Migration Board, for coordinating the reception for those who choose to stay in the municipality.

This job involves, for example, opening up so-called evacuation accommodation and collaborating on issues relating to crisis support, vaccination and other needs for care interventions. The municipality also works to be able to receive newly arrived children and young people from Ukraine in the municipality’s schools.

After the meeting in the town hall, Prince Carl Philip and Princess Sofia visited the local ferry terminal to talk to employees at, among others, the Swedish Migration Board, Stockholm’s ports, the police and some of the volunteers who were on site to receive the refugees.

In a statement the royals said: “Today we met people across the municipality of Nynäshamn to hear what their coordination and preparedness looks like in the reception of refugees from Ukraine. We also had the opportunity to meet and talk to volunteers, the Swedish Migration Board, the ports of Stockholm, medical staff and police in the port terminal to see their cooperation when ferries from Gdansk arrive with those who have fled the war. It was impressive to see what a professional, thoughtful and warm reception they convey to those who arrive in Sweden”.