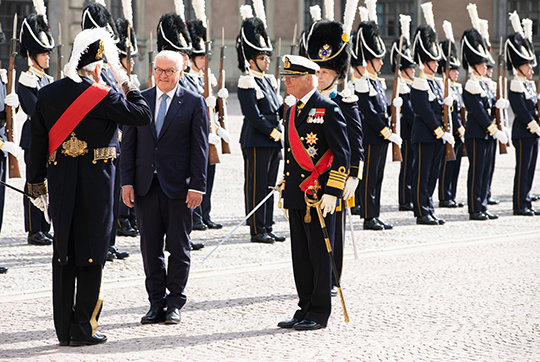 The three day State Visit of German President Frank-Walter Steinmeier and his wife, Elke Büdenbender, concluded on Thursday after the German leader had seen the best Sweden has to offer with the royals at his side. The visit took place in Stockholm and Kiruna under the themes of innovation, sustainability and democracy.

Crown Princess Victoria and Prince Daniel were at Arlanda’s airport to welcome the German couple before heading to the Hovstallet to meet the King and Queen.

King Carl XVI Gustaf and his German-born wife, Queen Silvia, welcomed the presidential couple on 7 September at the Hovstallet and joined them in a carriage procession through the streets of Stockholm on the way to the Royal Palace. The King and President then reviewed the Guard of Honour in the Inner Courtyard during the welcome ceremony. Inside the palace, the German couple met government representatives, the Crown Prince Couple and Prince Carl Philip and Princess Sofia, alongside the King and Queen. The President and King later spoke to the media before visiting the German Church and Riksdag (Swedish Parliament).

The Queen and Mrs Büdenbender travelled to the Ombudsman for Children to learn more about children’s rights based on the UN Convention on Rights of Child. They also visited the Children’s Home in Stockholm.

The evening concluded with a state dinner at the Royal Palace with the King, Queen, Crown Princess, Prince Daniel and Prince Carl Philip in attendance. Princess Sofia is still on maternity leave, and it is believed Princess Madeleine and her family have now returned to the United States.

On day two, the German President and his wife visited the King and Queen at their home at Drottningholm Palace to receive a tour of the palace and the grounds – the palace is on the UNESCO World Heritage List – before having lunch at Stockholm City Hall alongside government ministers. The King and President also took time to pay a visit to Scania (a world leader in supplying transport solutions), Karolinska Hospital (to view how they are handling the pandemic) and ArkDes (Sweden’s national centre for architecture and design).

Queen Silvia and Mrs Büdenbender, on the other hand, visited Silviahemmet (founded by the Queen and helps spread awareness of dementia to help gives those with the disease the highest quality of life), the German School (the oldest German school outside Germany) and the Goethe-Institut to discuss the language exchange of German and Swedish.

The presidential couple concluded the day by hosting the royal couple at the Royal Academy of Music for a reception in the evening.

On the final day, the visit took place in Kiruna, where the royals and German couple visited the Esrange Space Centre before attending a lunch at Kiruna City Hall hosted by the Governor of Norrbotten County, Lotta Finstorp. The King, Queen, President, and Mrs Büdenbender later travelled to the LKAB and the iron ore mine in Kiruna to learn about restructuring iron and steel.

The visit then concluded at Kiruna Airport, where a farewell ceremony was held, and King Carl Gustaf and Queen Silvia saw them off alongside the Honour Guard.