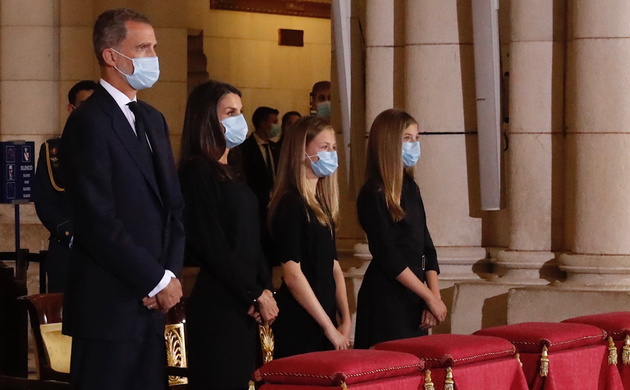 The Spanish Royal Family have attended a memorial service for Spain’s victims of coronavirus at the Cathedral Santa María la Real de la Almudena in Madrid.

King Felipe, Queen Letizia, Princess Leonor, and Infanta Sofía attended the service on the evening of July 6th 2020 alongside other Spanish dignitaries in honour of the 28,385 people who have died of COVID-19 in the country. The relatives of 70 victims attended the service.

“The solidarity of so many people involved in helping the victims of the pandemic is the simple and palpable sign of the closeness of God. We give thanks because there is in our society a great reserve of humanity and charity, of solidarity action. Now, we are offering them the best gift they could receive: our prayer and thanksgiving for each and every one of them. It is precisely in the celebration of the Eucharist for their eternal rest when we pray for them to God to welcome them into his Kingdom, we also ask forgiveness for their frailties and sins, and we thank God for their lives and for his Mercy and Goodness for with them.”

“We have gathered in this celebration of the Eucharist to pray for our brothers and sisters who have died due to the COVID-19 pandemic, which we are still suffering and which devastates all the peoples of the earth.Tonight, we say with the psalmist: ‘From the depths to you I cry, Lord,’ with the desire that You illuminate everything we are living. ‘My soul waits in the Lord, waits in his word,’ with the certainty that ‘from the Lord comes mercy, copious redemption.’ We know that you are now calling us to a choice: we must separate what is necessary from what is not; It is time to set the course of life towards you and towards others.”

After the Eucharist, the Bishop of Ávila and former Secretary General of the Spanish Episcopal Conference read Pope Francis’s prayer for protection during the pandemic.

Princess Leonor and Infanta Sofía accompanied their parents, having attended a several engagements showing solidarity for those affected by the coronavirus in the past few months. They joined their parents to attend a moment of silence for those who had died of the virus at Zarzuela Palace and they recorded a message for the children of Spain in April.

“…We want to say thank you to all the people who are helping out and looking after us in so many ways,” Infanta Sofía says in the video, with Princess Leonor adding, “You are all important. Thank you. We send you a hug with all our love.”