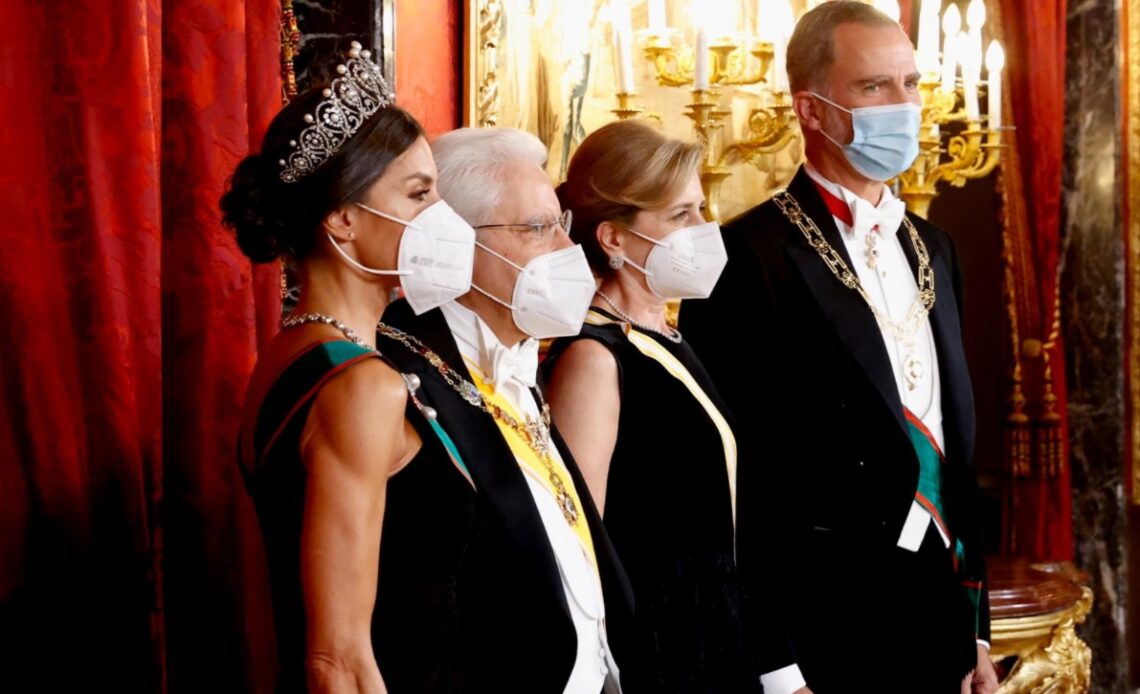 As most first days of any State Visit, the night brought a State Dinner for King Felipe, Queen Letizia and their Italian guests, President Sergio Mattarella and his daughter Laura.

Shortly after 8:30pm Spanish time, the King, Queen, President and daughter entered the Throne Room of Madrid’s Royal Palace to pose for photos, before receiving the line of authorities also taking part in the banquet.

Dressed in a black floor length gown, the Queen brought out the tiara called Queen Maria Christina’s Loop Tiara. Reportedly, it was made by jeweller Cartier for Archduchess Maria Christina of Austria as a present for her 1879 wedding to King Alfonso XII of Spain.

It more or less remained in the family ever since, although, following the death of the Countess of Barcelona, it was unclear wether the tiara had become Infanta Pilar’s personal property, or if her brother King Juan Carlos had the tiara in the family collection. Queen Sofía debuted it in 2006 during a State Visit to Norway, clarifying the tiara’s current situation.

Queen Letizia paired the diadem with a pair of small stud earrings, and a necklace and a brooch that are connected to Queen Victoria Eugenia, or Ena, as she was known.

The necklace has an interesting history; the base for it was created by Spanish jeweller Ansorena as a wedding gift from King Alfonso XIII to his new bride. Throughout the marriage, for big occasions such as births, birthdays and anniversaries, he would gift her extra diamonds that Ena would add to the necklace. At one point, the necklace had to be worn as a double row, one longer and one shorter. Eventually, the two rows were separated, with the longer one being put into the joyas de pasar (jewellery to be passed down). For the State Dinner, Queen Letizia wore the shorter row, that she also wore for the enthronement ceremony of Emperor Naruhito of Japan in 2019.

Queen Letizia pinned her newly-acquired sash of the Grand Cross of the Order of Merit of the Italian Republic with another piece from the joyas de pasar, a brooch made of a big central grey pearl surrounded by two clusters of diamonds. The original brooch only had one row of diamonds surrounding the central pearl; however, at some point during the piece’s stay in Ena’s vault, the second row of diamonds was added. The brooch can be worn with different pendants, or without any pendant; Queen Letizia seems to have opted for a grey freshwater pear-shaped pearl pendant, the same one she had on when she debuted the piece, at the Pascua Militar ceremony in 2019.

King Felipe also sported the collar and sash of the Knight Grand Cross of the Order of Merit of the Italian Republic; he already had the order from 1996, but during this State Visit he got upgraded to Knight Grand Cross with collar.