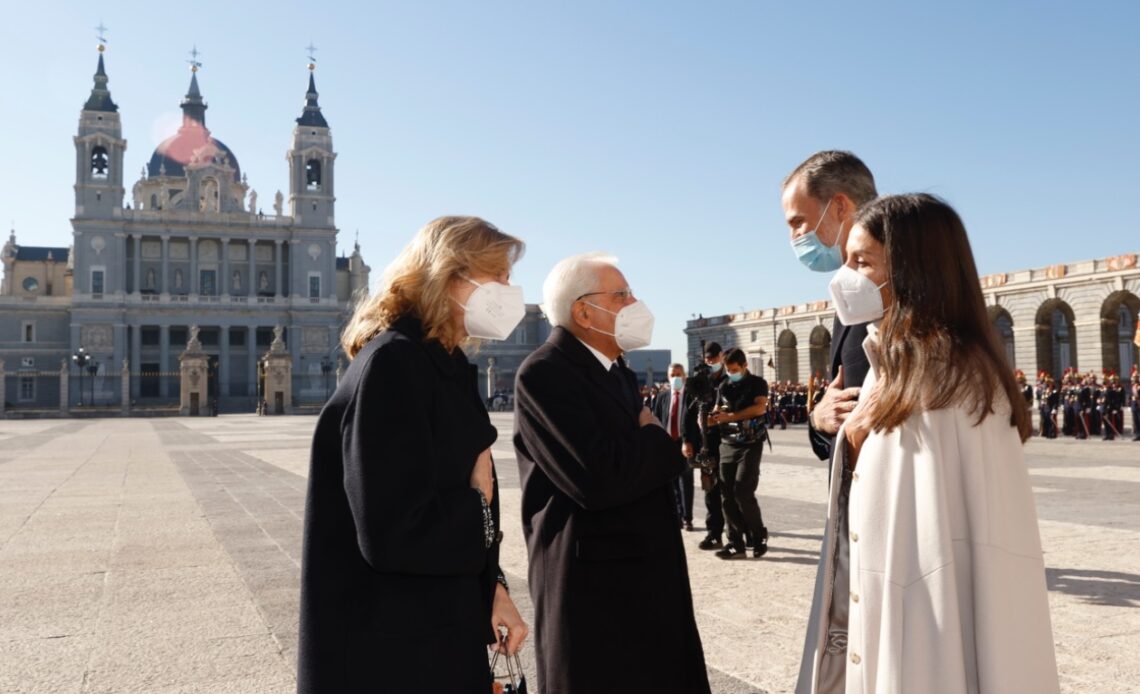 With all the ceremony due to the occasion, King Felipe and Queen Letizia have welcomed the President of the Italian Republic, Sergio Mattarella, and his daughter Laura Mattarella for a two-days State Visit.

President Mattarella landed in Madrid’s Barajas-Adolfo Suarez airport on the morning of 16th November, and was welcomed there by Italian and Spanish authorities. From there, he travelled to Madrid’s Royal Palace, where King Felipe and Queen Letizia welcomed him with military honours.

At the meeting at the Royal Palace, there was a Spanish delegation of authorities present, including Prime Minister Pedro Sanchez, the Presidents of the House and the Senate and the Minister for Foreign Affairs, European Union and Cooperation.

President Mattarella then laid a floral wreath at the monuments for those who fell for Spain (Monumento a los Caídos por España), an act where he was not accompanied by the King.

The two Heads of State then met again in the Zarzuela Palace, where they held another meeting that included this time the Italian Foreign Affairs Minister Luigi Di Maio, who is also travelling with the Italian President, as well as many Spanish authorities.

The day continued with a meeting for President Mattarella with Prime Minister Pedro Sanchez at the Moncloa Palace, before the State Dinner concluded the day’s events.

President Mattarella travels with his daughter Laura serving as First Lady, since he lost his wife Marisa to cancer in 2012. While she has done so in the past, the agenda for this visit does not anticipate her carrying out any solo engagements, which means that Queen Letizia’s agenda will also be quite light compared to usual State Visits.

According to the Italian Presidency’s website, the last State Visit of an Italian President to Spain was done in 1996 by then-President Oscar Luigi Scalfaro. King Felipe and Queen Letizia have previously met President Mattarella on several occasions, including in 2015, when the newly elected President made an official visit to Spain.