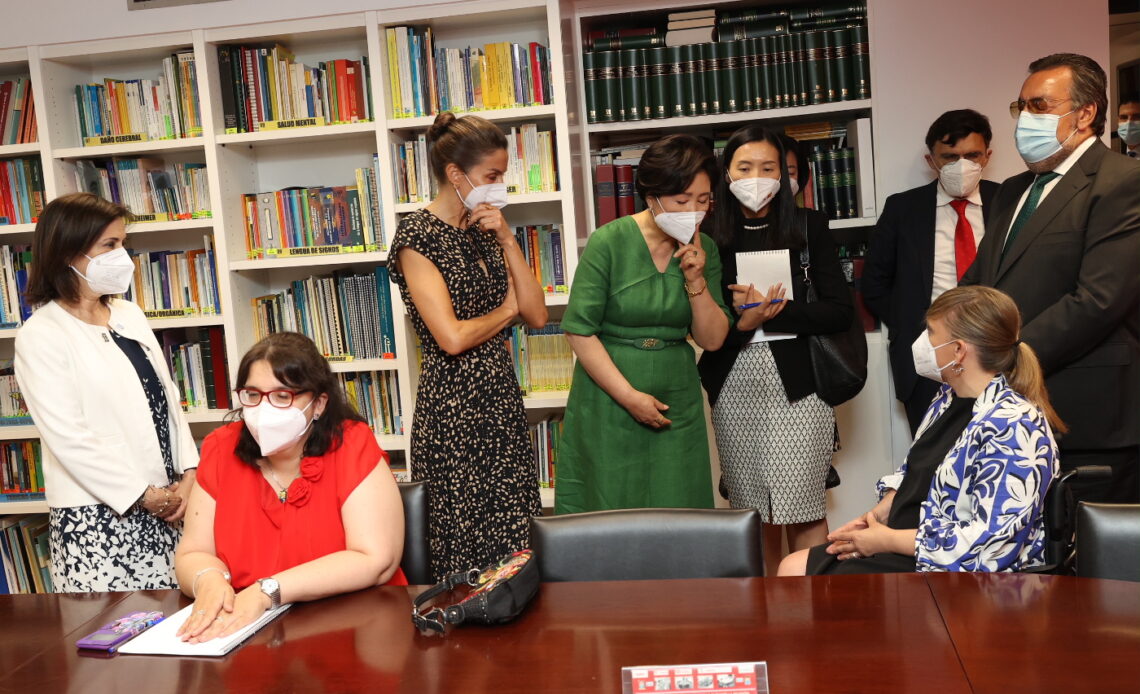 Queen Letizia of Spain was joined by the First Lady of South Korea Kim Jung-Sook for a visit to the ONCE Foundation on day two of the South Korean state visit to Spain.

The ladies visited the headquarters in Madrid and were received by the Spanish Minister of Defence and ONCE’s President of the Social Group, Miguel Carballeda. Carballeda gave a short welcoming speech upon their arrival, saying that the Social Group was “a unique model in the world of social and labour inclusion of blind or disabled people.”

Queen Letizia and First Lady Kim toured the training room for 15 disabled students to learn telemarketing skills online and in person. They then moved on to view two exhibition halls, “Inserta” and “Cambio de Sentido”, to learn more about the “Two glances about the same reality” exhibit. The display contains artwork of non-disabled people who have worked with the ONCE Foundation. Artists who have their work exhibited include photographer Pete Ecker, painter Dan Miller and Cristina García Rodero.

In the EspacIA room, the Queen and First Lady were able to see firsthand entrepreneurship initiatives by those with disabilities. They also learned about different projects the foundation is involved in, got a look at the experimental robot “PACA” (Personal Accessible Cognitive Assistant) and were given demonstrations of some of the projects.

The tour concluded with Kim Jung-Sook presenting Carballeda, a Braille watch made in Korea. Then, she and the Queen purchased coupons from a vendor at the foundation that had numbers that represented the beginning of diplomatic relations between Spain and Korea on 17 March 1950. The numbers were written how each country writes the date (17350 – Spain- and 50317 – Korea). The ladies later exchanged their tickets.

The ONCE Foundation assists those with disabilities in employment and accessibility.