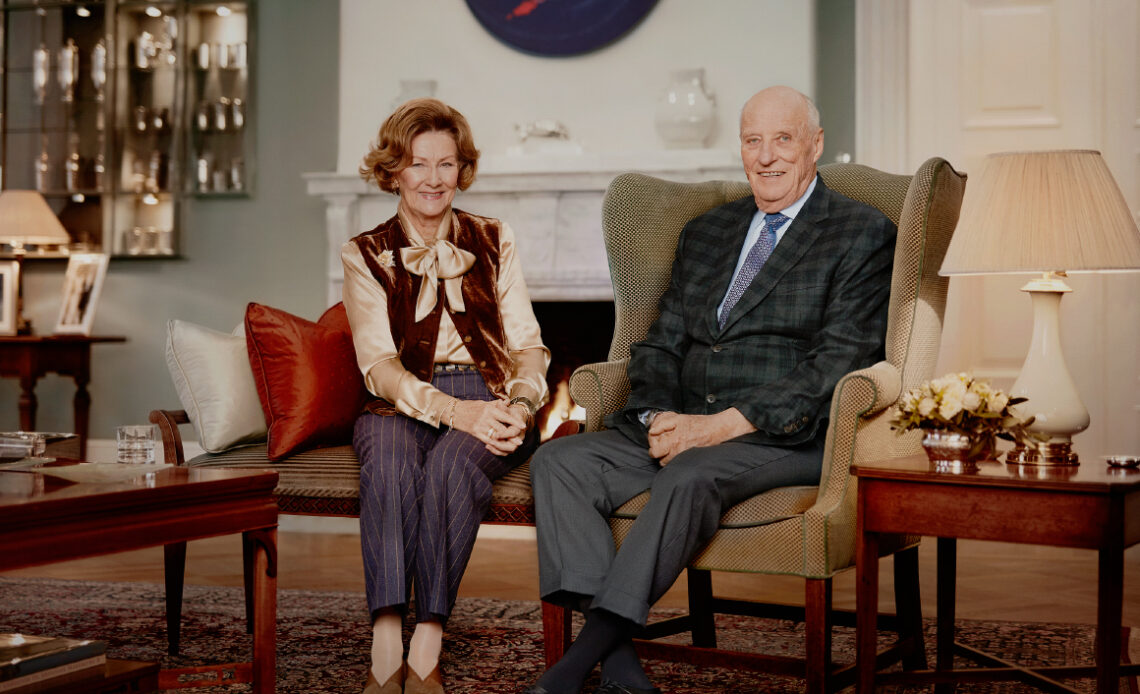 Their Majesties King Harald and Queen Sonja of Norway continues their three-day long journey in western Norway. On Wednesday this week the King and Queen of Norway visited shipyards that have been affected by corona outbreaks, and talked to a young returnee to one of the small, idyllic towns in Hyllestad.

Hyllestad is beautifully situated at the entrance to the famous Sognefjord. The King and Queen went ashore on the quay at the Havyard Leirvik shipyard in Hyllestad municipality Wednesday morning. Mayor Kjell Eide received the royals and gave a short presentation inside the yard together with the director. The royals had a conversation about the Hyllestad community related to business, restructuring, new opportunities for the shipbuilding industry and other industries, as well as the situation during the pandemic in the municipality.

Havyard Leirvik builds advanced vessels and electric ferries and is the largest business in the municipality. Last autumn, the more than 100-year-old shipyard was closed after a large corona outbreak. In the municipality with 1500 inhabitants and shipyard employees, 700 people have been quarantined after the outbreak. The royals visited Havyard Leirvik on a trip in Sogn og Fjordane also in 2002.

Then, the visit continued in the local park who also is an outdoor museum in the largest quarries from the Viking Age and the Middle Ages in Northern Europe. The millstone was something everyone had to have at the time. Millstones from this quarry were sold in the hundreds of thousands throughout Norway, Sweden and Denmark. Queen Sonja opened the historical park in 2002. On Wednesday, Queen Sonja opened a new cultural trail, with the same hand mill as 19 years ago.

23 years old Tanja Kvellestad Akse moved home to Hyllestad in the middle of her studies. She is mother of one and her boyfriend has a job in Hyllestad. On Wedensday she met the royals and told the King and Queen about the desire to move home and about the bachelor’s degree in special education from Tromsø, which she has completed at home in Hyllestad. Hyllestad is a small community and struggles with the same as many other small settlements and smaller municipalities, emigration. The population in the municipality has decreased since 1950. Young people move to cities and larger towns, and only a few return after their studies.

The royal visit of western Norway will today be concluded in the city of Florø.