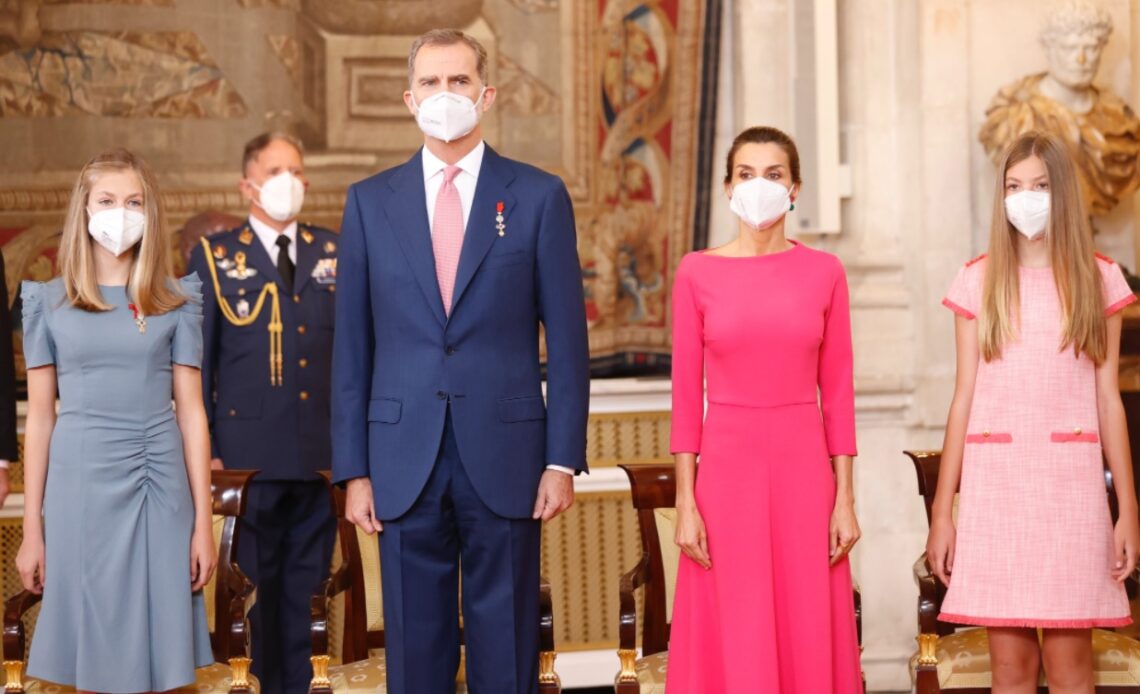 Every year on October 12, Spain celebrates their National Day – an event which composes of a military parade and a reception at the Royal Palace.

This year, King Felipe, Queen Letizia and Infanta Sofía made the journey to Lima Square in Madrid to watch the military parade.

For the first time since 2014, when Felipe became King, the heir to the throne was not present. Princess Leonor is currently in Wales attending UWC Atlantic for her last two years of high school education. It is expected that she will return to Spain to take part in the Princess of Asturias Awards events, which will take place next week.

At around 10:30am and escorted by a Royal Guard squadron, the Royal Family arrived in Lima Square.

King Felipe was wearing the uniform of the Army, which was the one on rotation this year, since he wars each year a uniform from one of the three branches of the military he trained in (Army, Navy, Air Force).

The Royals were welcomed by cheers from the sparse crowds who were kept at a safe distance because of health safety concerns.

The Honour Guard of the Royal Guards were in charge of giving honours to the royals, meaning that they offered their flag while the King, Queen, and guests observed.

Following this, His Majesty reviewed the troops, while the rest of the Royals follow behind. When they arrive in Lima Square, in front of the Royal tribune, the Royal Family salutes a second, longer lineup, made of the State’s authorities, Presidents of Autonomic Communities and high ranking military personnel.

Following the salute, the Royal family took their seats in the Royal tribune. Because of Princess Leonor’s absence, Infanta Sofía was sat in the seat next to her father. The homage portion of the act began with a jump from the Army Paratroopers carrying a large national flag, 70 meters wide and weighing 15 kilograms. Once the paratrooper landed, the flag was raised while the National Anthem played and a 21 cannon salute was fired.

It was then the turn of the most poignant part of the ceremony – a homage to those who gave their life for Spain. The Royal Guard’s music unit was in charge of playing “La muerte no es el final” (“Death is not the end”), a traditional military song used for such occasions.

The actual military parade began soon afterwards, opened by the Águila patrol painting the sky in red and yellow – the colours of the Spanish flag – with an aerial display of warfare aircrafts, then the four military branches on foot.

The aerial display was made of 68 aircrafts, divided in fighter jets, cargo planes and helicopters, with the addition of aircrafts from the Maritime Saving, the National Police Corps and the Tribute Agency.

The terrestrial parade was to follow, and it was opened by a mechanised display of 114 vehicles under the command of General Chief of the Almogávares VI infantry brigade, that saw also the parade of military veterans, voluntary reservists and servicemen with disabilities.

It was then the turn of four groups on foot, each representing peculiarities of various regiments of the Spanish Army. Two moments of particular notice during this portion of the event were the parading of two mascots: the mountaineers division’s mascot, a St. Bernard dog, and Puzzle the goat, the current mascot of the Legion.

The military portion of the act concluded after the parade was closed by another flight past of the Águila patrol, with the Royal family again saluting the lineup of authorities before making the journey to the Royal Palace, where the King and Queen held a reception.

Spain celebrated National Day on October 12 in memory of the presumed date of Christopher Columbus arriving in America and the Spanish language and culture beginning to spread throughout the world.