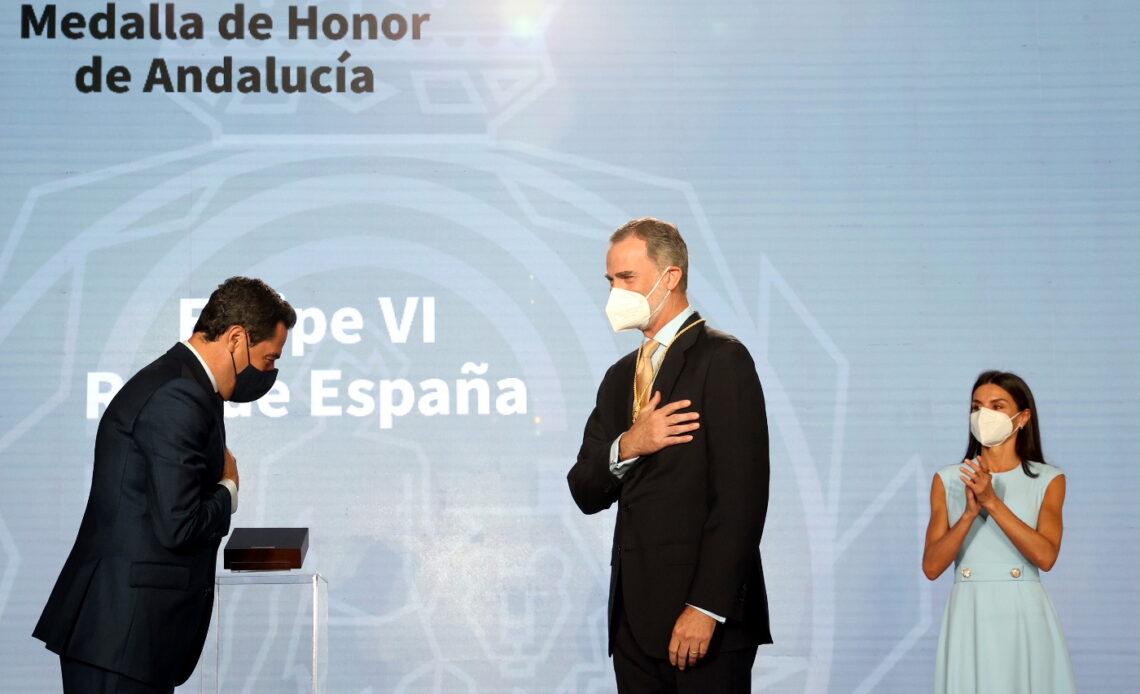 King Felipe travelled to Sevilla, Andalusia, to receive the first medal of honour awarded by the Andalusian Parliament.

Accompanied by his wife, Queen Letizia, His Majesty arrived at San Telmo Palace in Sevilla, which hosts the headquarters of the autonomic government of Andalusia. Their Majesties were received by the Spanish Government’s Vice President, Carmen Calvo, and all the authorities in the Andalusian Government, including the President of the Parliament.

Once inside, King Felipe and Queen Letizia unveiled a plaque commemorating the medal ceremony and the visit to the Andalusian government.

King Felipe then gave a speech in which he highlighted the resilience spirit of Andalusia and the Andalusian people, especially during these trying times.

The national and local anthems were played on the piano, with the Andalusian anthem being sung by the 14-year-old winner of the Eurovision festival for blind people.

After the handing out of the medal, Their Majesties visited the floor of the Andalusian Assembly and signed the visitors’ book, which brought the act to an end.

This is the first time such a medal is awarded; the prize has been created with an extraordinary decree passed in December of 2020 by the Andalusian Parliament.

The medal has been awarded to King Felipe for his being the strongest tie between the Andalusian people and state institutions. The motivations for this award are undoubtedly a relief for King Felipe, who has faced strong anti-monarchy feelings elsewhere in the country, particularly in Catalonia.

The decree with which the medal has been awarded states that King Felipe and Queen Letizia have carried the monarchy into the times we live in, but at the same time, King Felipe has highlighted the powers the Constitution awards the monarchy. It also underlines how King Felipe has championed ideals of unity and togetherness, which the Crown should embody.

Throughout the act, Queen Letizia radiated pride for this honour being awarded to her husband. Shortly after the medal ceremony, King Felipe was seen at the Sevilla stadium to cheer the Spanish team on their debut in the European Football Championships.