King Felipe chats with winners of “What is a King for you?” contest 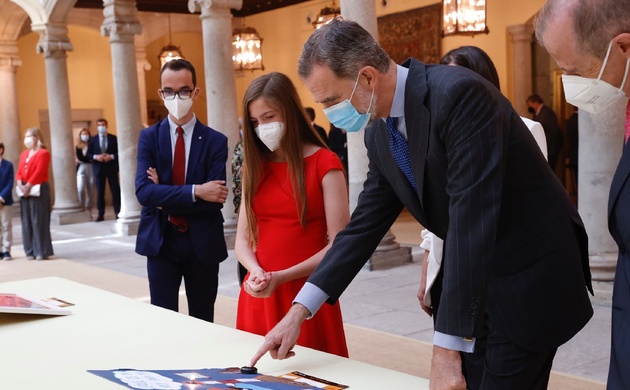 On Thursday, King Felipe of Spain welcomed participants in the contest “What is a King for you?” to the Royal Palace in Madrid.

The contest is held every year by the Spanish Institutional Foundation and sponsored by the Orange Foundation (nothing to do with the Dutch Royals, apparently!). It aims to create a closer bond between students and the monarchy and to deepen the knowledge students have of the Spanish constitution’s definition of the monarchy’s role within the state.

The contest has reached its 40th anniversary and has been brought to its current fame by King Juan Carlos I. He wanted to bring the monarchy closer to the Spanish population. King Felipe has taken part in the contest every single year since he has been on the throne. He tours the exhibition, he chats with students and teachers present, and he listens to speeches given by the President of the Orange Foundation and other authorities present.

The Spanish Institutional Foundation is a cultural private NGO that aims to promote the study of the monarchy as an institution, as well as the influence the monarchy has on the population, among many other things. The Orange Foundation has at its core the promotion of culture in its many forms and the bringing to fruition of culture by people with different disabilities.