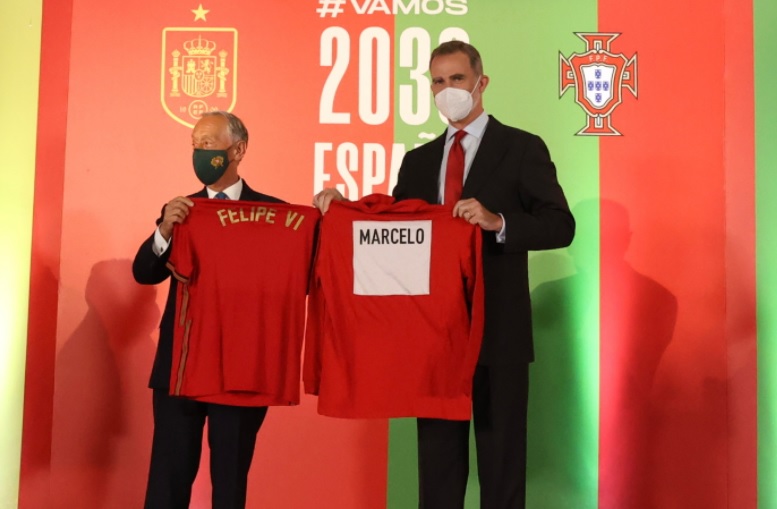 King Felipe of Spain has welcomed Portugal president Marcelo Rebelo de Sousa to Madrid for an afternoon of engagements related to the candidacy of Spain and Portugal to jointly host the FIFA Football World Cup in 2030, the year the contest marks its centenary.

The Portuguese President travelled to Madrid,on June 4th 2021, where he was welcomed at the bottom of the Royal Palace stairs by His Majesty – a new tradition started by King Felipe, since in the past the royals used to wait for their guests in the meeting room rather than greet them as soon as they exited their vehicle.

In the meeting room, The King and the President were joined by Queen Letizia for photos followed by a private conversation before His Majesty and Mr. Rebelo de Sousa exited the Royal Palace for a short walk and a café visit.

In the evening, the main event of the visit took place: in the Wanda Metropolitano stadium in Madrid, King Felipe and the Portuguese president presented Spain and Portugal’s joint candidacy to host the 2030 FIFA World Cup. At this event, they were accompanied by their respective Prime Ministers – Pedro Sánchez of Spain and Antonio Costa of Portugal. They were also joined by the Presidents of the Spanish Football Association, Luis Rubiales, and his Portuguese counterpart, Fernando Gomes. The King and the President were present when the Presidents of both football associations and both Prime Ministers signed the document with which they officially begin their bids to jointly host this competition.

Following that, the friendly match began with the playing of the National Anthems; during the half-time break, the King and the President visited the changing rooms, where they were presented with commemorative shirts to mark the occasion.

The FIFA World Cup is the most prestigious and famous global football competition, and hosting it can bring a great boost to the host country’s economy. For the 2030 tournament, which marks the centenary of the contest, the Iberian candidacy is competing against one other candidacy, one presented jointly by Argentina and Uruguay. The decision by FIFA should come in the spring of 2022, after the conclusion of the Qatar World Cup and four years before the 2026 FIFA contest hosted jointly by Mexico, the United States of America and Canada.