Former Prince Nicholas of Romania to be a father again 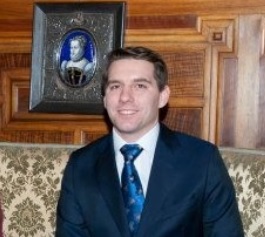 This last weekend Nicholas of Romania announced that his wife Alina-Maria is expecting a baby in the spring of next year. The message was published on the former Romanian Prince`s Facebok page. This will be the second child for the couple.

The statement published to the press reads as follows: “On the eve of St. Nicholas, the Patron Saint of children, we are delighted that our family will be blessed again. My wife and I are very pleased to announce that we are expecting a baby in spring 2022. After Maria-Alexandra, we thank God for giving us the joy of another child. Nihil Sine Deo”.

The former Romanian Prince, now usually addressed as Nicholas of Romania or Nicholas Medforth-Mills, and his wife, Alina-Maria, were civilly married on 6 October 2017 and religiously married on 30 September 2018. Nicholas is the son of Princess Elena of Romania and the late Dr. Robin Medforth-Mills. This make him a grandchild of King Michael I of Romania and a nephew of the present head of the Romanian Royal Family, Her Majesty Margareta, Custodian of the Crown of Romania.

Nicholas of Romania and his wife, Alina-Maria, welcomed the arrival of their first child last year. Their daughter, Maria-Alexandra, was born at the Polizu Hospital in Bucharest at 8:05 pm on Saturday, 7 November 2020. The Romanian Royal Family expressed then their congratulations on Twitter.

Nicholas and Alina-Maria live in Bucharest. As a grandson of Michael I, the former king of Romania, Nicholas was third in line to the throne of Romania according to a new family statute enacted in 2007 that also conferred the title of a “prince of Romania” on him. That was abrogated in 2015. His royal title was revoked in 2015 because the former prince was supposed to have had a child out of wedlock.A paternity test and a statement from Nicholas confirmed that he was the father of a child born outside marriage.