The love of King Harald and Queen Sonja 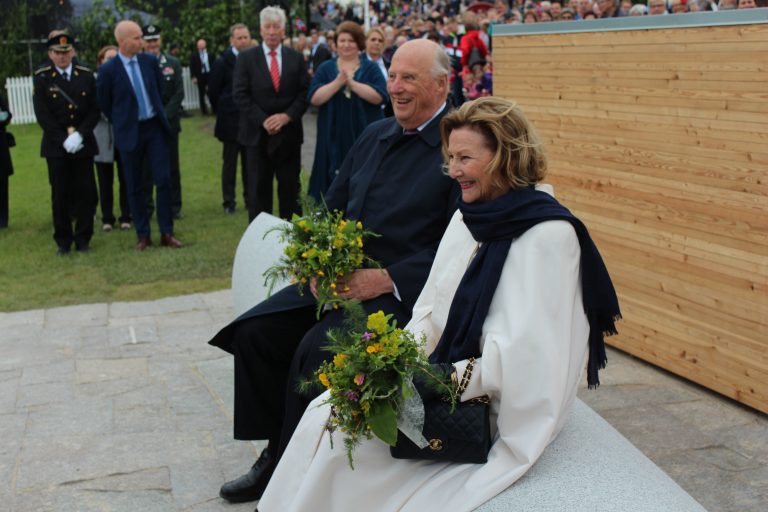 As Norway prepared to celebrate the 80th birthdays of Their Majesties the King and Queen in 2017, I thought the story of King Harald and Queen Sonja’s relationship was worth sharing with our readers. Three years later, as the world grapples with a pandemic, we need happy and positive stories to help us through. And their love story is one that will brighten your day.

Prince Harald was born on 21 February 1937 in the royal residence, Skaugum. His parents were the then Crown Prince (later King) Olav and Crown Princess Märtha (of Sweden). The future Norwegian monarch had two sisters – the late Princess Ragnhild and Princess Astrid. He was forced to flee Norway with his mother and sisters after the Nazi Germany invasion of the country during World War Two. They first travelled to Sweden before moving on to the United States where Harald spent the war years in Washington D.C.

Sonja Haraldsen was born on 4 July 1937 at the Red Cross Clinic in Oslo. Her parents were Karl Haraldsen, a clothing merchant, and Dagny Ulrichsen. She had three siblings Haakon, Gry, and Karl. Sonja would end up receiving a diploma in dressmaking and tailoring, as well as a degree from the finishing school, École Professionnelle des Jeunes Filles in Switzerland. She then attended the University of Oslo receiving a degree in French, English, and Art History.

The couple could not have come from more different backgrounds. However, it was in 1959 that Harald met Sonja, and the rest, as they say, is history. They quietly dated for nine years before they were given permission to marry. Their relationship stayed a secret for almost a decade due to Sonja’s commoner status. Then Crown Prince Harald told his father that he would never marry unless he gave permission to wed Sonja, which would have ended the family’s reign on the Norwegian throne after Harald’s death. After the engagement announcement, there was not much resistance by the Norwegian people of having a commoner queen.

Finally, in March 1968, the Royal Court of Norway announced that King Olav had given the pair permission to marry. They wed on 29 August 1968 at Oslo Cathedral. Sonja threw herself into her work as the Crown Princess of Norway and quickly gained popularity. She gave birth to her and Harald’s first child, Princess Märtha Louise on 22 September 1971. She was followed by Crown Prince Haakon on 20 July 1973. Until 1991, Märtha Louise could not inherit the throne. That year the laws of succession were changed to absolute primogeniture, but, unlike in Sweden, the Princess did not replace her brother as heir.

King Harald and Queen Sonja now have six grandchildren. They have four granddaughters, Princess Ingrid Alexandra (daughter of the Crown Prince Couple), and Maud Angelica, Leah Isadora, and Emma Talulah Behn (daughters of Princess Märtha Louise and her ex-husband, Ari Behn). They have two grandsons: Prince Sverre Magnus and Marius Borg Høiby. Sverre Magnus is the son of the Crown Prince Couple, and Marius Borg Høiby is the son of Crown Princess Mette-Marit from a previous relationship. After Mette-Marit married Haakon, Marius was welcomed and treated just like any of the King and Queen’s other grandchildren.

The marriage of Harald and Sonja has been one of much happiness and sincere love for one another. They celebrated 25 years on the throne in January 2016, and both celebrated their 80th birthdays in 2017 with a tour around Norway.