The lost tiara of Queen Maud 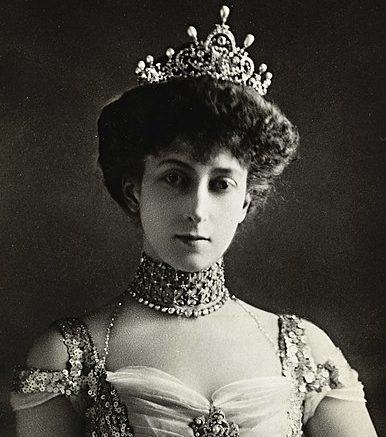 This year, it is 150 years since the Norwegian Queen Maud was born in London. Much has been written about the queen who was elected to be monarch together with her husband as a new Norwegian royal couple in an independent Norway in 1905. When Queen Maud came to Norway, she brought a lot of jewellery with her. One item from this precious collection has simply disappeared. It has been stolen and it became a true royal mystery, because no one has ever been arrested for the theft.

When Queen Maud married the then Prince Carl of Denmark, later king Haakon VII of Norway, she received many valuable presents from her family. Among them was a diamond and pearl diadem, a wedding present from her parents, King Edward VII and Queen Alexandra of United Kingdom. The masterpiece of jewellery art has later been referred to as “Queen Maud’s pearl-tiara”.

The marriage occurred in 1896 and at that time, the “need” for tiaras was much greater for royal women than it is today. For example, Maud’s sister-in-law, Queen Mary of the United Kingdom, wore a tiara to dinner every day.

“Queen Maud’s P earl Tiara” was made of diamonds and pearls, framed in white gold and platinum. The large centrepiece, with its winding shapes, recalls the Art Nouveau style which was the height of fashion in 1896. The side pieces, however, which look like small flowers topped with a drop bead, are very traditional. Who made the original tiara is not known.

Between 1896 and 1905, the tiara was used regularly. It became one of the Maud`s favourite tiara`s as it was a good mix between the modern and the traditional. Maud also got many compliments from people who thought the tiara was very beautiful.

Queen Maud’s sister, Princess Victoria, borrowed the tiara from her sister in 1902 and used it during her father’s coronation. In Norway after 1905, the tiara was often used when Maud and Haakon hosted balls, state visits and large dinners. It was a regular sight on the Queen’s head.

In the autumn of 1938, Maud went to the United Kingdom. The Queen had cancer and recived medical help. However, following an operation in the first weeks of November, Maud’s health deteriorated and she died of heart failure. It was later revealed that Maud took most of her jewellery with her when she went to London in 1938, for unknown reasons.

This was actually one of the best things that could happen, because two years later the jewellery had still not been brought back to Norway which meant it was out of reach when the country was occupied by German forces. That is why King Haakon decided that Maud’s jewellery, including the tiara, should be kept in a secret location in the UK for the time being.

It was when Crown Prince Olav and Crown Princess Martha travelled to the UK to attend Queen Elizabeth’s coronation that the tiara came back. They brought the famous diadem and other jewellery to Norway on the royal yacht “KS Norge”.  However, apart from a set of earrings, Crown Princess Märtha never wore Maud’s jewellery. The Crown Princess died just months after bringing the tiara and jewellery back to Norway.

Following Crown Princess Martha’s death, her children decided not to share the jewellery until Harald had married. When Queen Maud’s six tiaras were divided between then Crown Prince Harald, Princess Astrid and Princess Ragnhild three of the tiaras continued within the ruling part of the family. Among them was the “Queen Maud’s Pearl Tiara”.

When Sonja married into the Norwegian royal family, she became the regular wearer of this historic tiara. She did not use it very often, only at major events such as State Visits. Queen Sonja has always preferred the larger emerald diadem that King Harald inherited from his mother and which originally comes from Queen Josephine of Sweden-Norway.

In 1995, the pearl diadem was shipped to London for restoration. It arrived at the London-based company Garrard’s in London in February 1995. Three armed robbers broke into the shop on Regent Street in London and stole the tiara together with a brooches and some other small jewellery which was not owned by the Norwegian royals. The jewels had been repaired and were ready to be returned to Oslo when the robbery occurred.

During the raid three people, including a robber dressed as a policeman, ambushed and tied up two security guards before fleeing with the jewellery. About 70 armed police officers later laid siege to the shop for five hours before entering the empty premises. The robbers used a blue Volvo for the getaway. This car was later found in Farringdon Road in the City of London.

A huge search for the perpetrator began and lasted for several years. However, no one has ever been arrested. The police in London stated that the tiara had, in 1995, an estimated value of £200,000. Queen Sonja was and still is a regular customer of Garrard’s and the theft was described by the firm’s CEO as a huge embarrassment for the company.

This was a huge shock to both the jeweller and, of course, the Norwegian Royal Family. Fortunately, the diadem was insured and Garrard’s was therefore commissioned to make a true copy of the lost and very expensive diadem. Among other things, the theft led to the Norwegian royal jewellery being some of the best secured in Europe. All requests from museums to display original jewellery have been rejected since 1995.

In April 1996, Queen Sonja could wear her new diadem for the very first time. The copy of the Maud’s famous tiara was first seen during a Norwegian royal visit to the Dutch royal family in Amsterdam.

A substantial reward has been offered for the recovery of the stolen items. The tiara is still lost without trace and must be somewhere out there. We can only hope that one day it will be found and returned to Norway.