Queen Sonja’s jewels for the State dinner: a tiara from a lost Empire 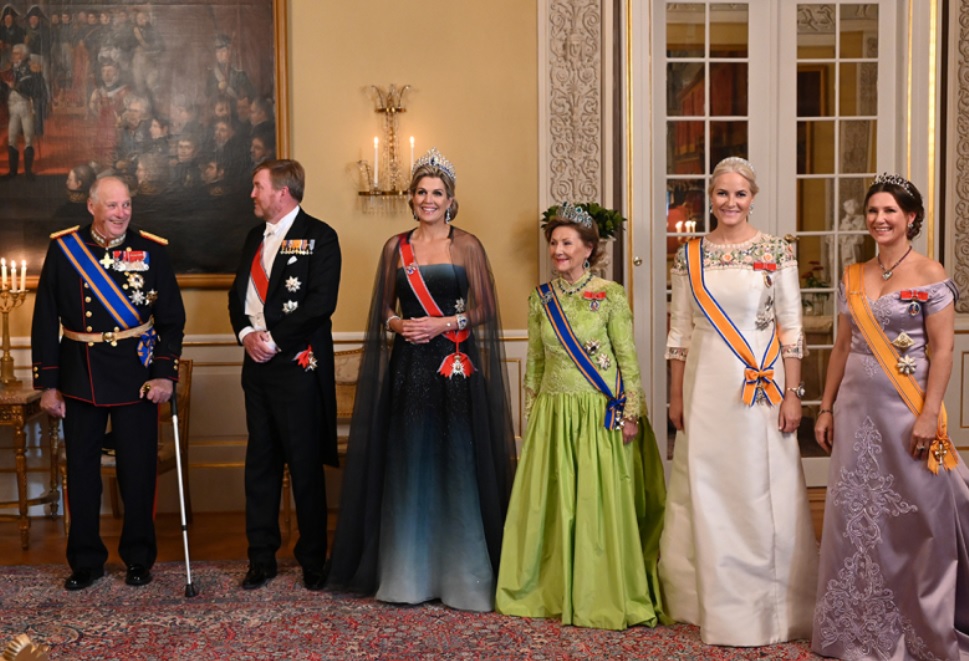 One of the most awaited moments of any State Visit, especially those that include Monarchs, is the State Dinner.

Coming usually at the end of the first day, the State Dinner is a glittering affair, with fancy clothing (gala uniforms or white tie for men, ballgowns for women) and the best jewellery one owns. This latter point includes tiaras for royal women, which are always a great point of interest.

As the first day of King Willem-Alexander and Queen Máxima’s State visit to Norway came to a close, on November 9th 2021, the royals gathered in the Royal Palace in Oslo for the State Dinner.

And because there were two Queens involved, everyone there pulled out the best tiara they had. Queen Máxima wore the sapphire tiara made by jeweller Mellerio, Crown Princess Mette-Marit wore her wedding tiara, made of diamonds arranged in daisies (hence the name with which it is most known, the Diamond Daisy Tiara) and Princess Märtha Louise wore the so-called Amethyst Necklace Tiara, rumoured to have been a present King Harald purchased for his wife, who wore it for a while before passing it on to her daughter (who debuted it in 2010 at Crown Princess Victoria and Prince Daniel’s wedding in Sweden) and daughter-in-law (who debuted it at the pre-wedding dinner for Crown Prince Frederik and Mary Donaldson in 2004 in Copenhagen).

But it was Queen Sonja who attracted a lot of the looks, because she chose to wear the tiara and accompanying jewels known as Princess Joséphine Emerald parure.

As the name suggests, it is believed that this tiara, which also comes with a pair of earrings, a necklace and two brooches, started its existence with Empress Joséphine, the first wife of Napoleon Bonaparte.

After Empress Joséphine’s passing, the tiara seems to have ended up with her granddaughter Queen Josephine,  consort of King Olav I of Sweden and Norway. From there, we lose track of it in Sweden, where it is believe to have stayed until it reappears in some portraits of Queen Sofia of Sweden. She gifted it to her son and daughter in law, Prince Carl of Sweden and Princess Ingeborg of Denmark; they, in turn, gifted it to their daughter, Crown Princess Märtha, who was married to Olav, later King of Norway. Märtha died at the age of 53 leaving three children behind: Harald (the current king), Ragnhild and Astrid, with the latter serving as First Lady for her widowed father until Harald married.

And so we reach the modern age, and the fact that this tiara is solely worn by Queen Sonja nowadays; with its value and its grandeur, it is clearly only fit for a Queen.As she does most of the time, Her Majesty last night also wore the other pieces in the parure: the necklace, the earrings and one of the two brooches, which was pinning in place her Order of the Netherland’s Lion sash.

It is usual for the two sets of heads of State in any given State visit to wear the other country’s orders, if they have any; otherwise, you wear the sash of the highest order you have from your own country.