Queen Sonja honours school with an award in her own name 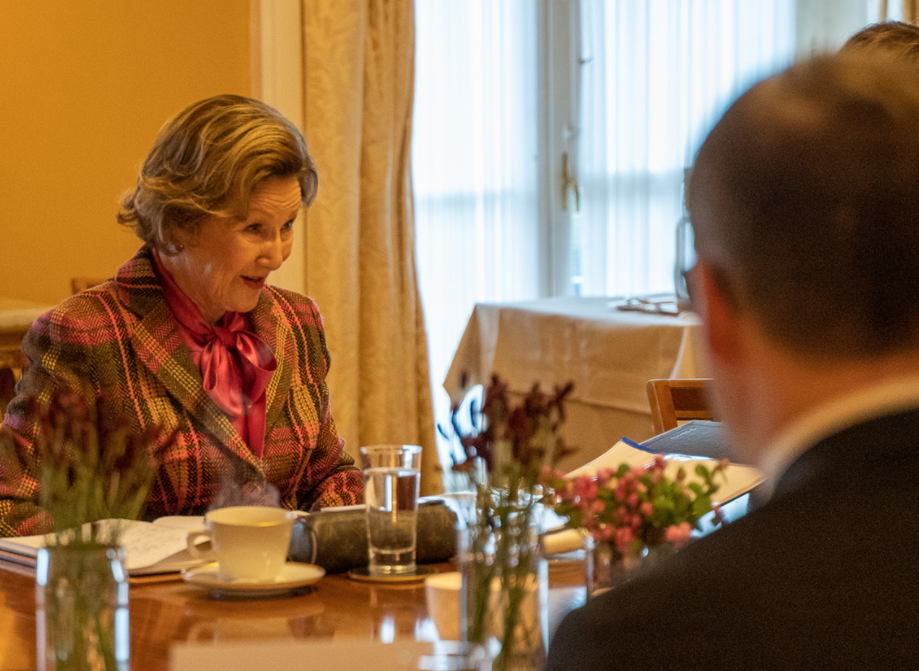 This year marks the 15th anniversary of the first Queen Sonja School Award – an honour instigated and named after the Queen of Norway.

Queen Sonja has been present at all the award ceremonies over the past 15 years, with Thursday being no different, as Her Majesty awarded the 2021 prize to Sandnessjøen upper secondary school in the Nordland region.

The Queen was received by the school’s principal, Arne Tømmervold, and student council leader, Ida Olsen-Dahlen. Students from the school stood on either side of the entrance to welcome the Queen to the town of Sandnessjøen and to the school.

Before the award ceremony began, Her Majesty undertook a tour of the school. The Queen visited a class where she met with the students. Her Majesty also visited 15 students who are taking ambulance courses and who will go into practice now before Christmas. The students demonstrated what actions they take if they have to attend to a patient with chest pain.

The school works closely with local businesses to secure apprenticeships for its vocational students. The jury for the school award emphasised that it helps to counteract dropouts and ensure that more people succeed and become skilled workers. The Queen and her entourage also received a presentation about the school environment and participation in the MOT program, which is there to combat bullying. Each morning, the school’s 450 students are welcomed on the steps by environmental worker Ken Pettersen.

The award ceremony took place in Stamneshallen, which is next door to the school. The prize itself consists of 250.000 Norwegian krone and a print made by the Queen herself. This year, 19 schools from across the country were nominated for the Queen Sonja School Award. The Queen gave a speech in which she praised the school and the students and emphasised the importance of the vocational subjects.

Her Majesty the Queen said: “This year’s prize winner is a worthy winner, it is stated in the jury’s reasoning and highlights a number of areas where Sandnessjøen upper secondary school excels: Good and comprehensive collaboration with the primary school on the transition from lower secondary school; Support for apprentices and students who have not previously passed all subjects; Systematic cooperation with the home; Strategies for students with high learning potential; Real student participation; Student representation. Security and well-being are fundamental to running a good school and Sandnessjøen upper secondary school has taken great responsibility for inclusion and integration in our society”.