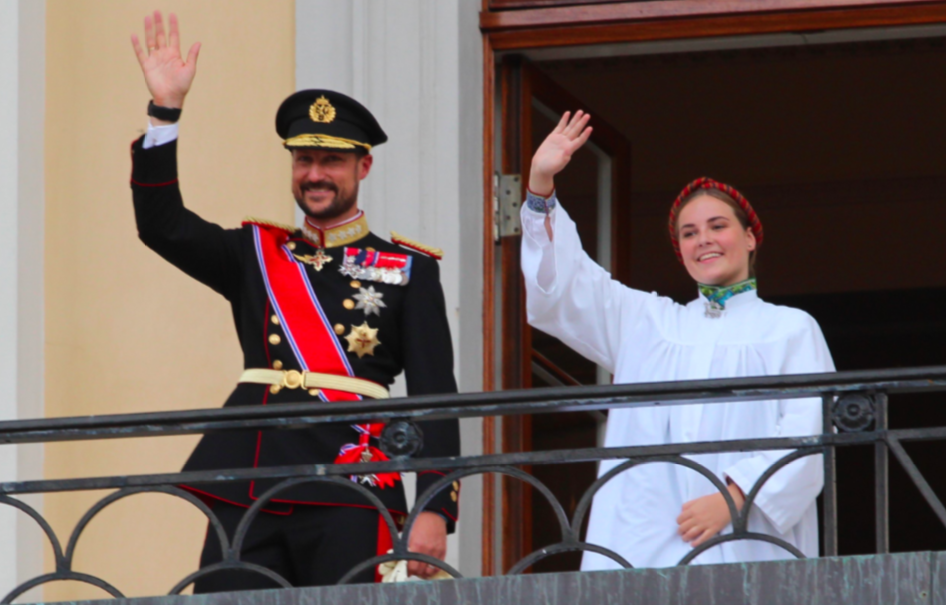 On Saturday, royals from all over Europe gathered in Oslo to celebrate the confirmation of Princess Ingrid Alexandra of Norway. Royal Central’s Senior Europe correspondent Oskar Aanmoen was present outside the Royal Palace for the occasion, and sent us the following report.

In her brand new national costume, a gift from the King and Queen, Princess Ingrid Alexandra confirmed her religious belief in the Norwegian protestant church.

The Princess, who is second in line to the Norwegian throne, took her confirmation education in Asker church under the leadership of priest, Tor Øystein Vaaland, and acting parish priest, Karoline Astrup. Although Ingrid Alexandra has received confirmation teaching with her friends in Asker, she was confirmed alone.

Ingrid Alexandra’s confirmation was quite standard, according to Norwegian Lutheran tradition. It consisted of a traditional worship with an extra prayer ceremony where the priests asked God to bless and strengthen Ingrid Alexandra through her confirmation.

The Princess kneeled in front of the altar where the priest prayed for her and “told God” that the Princess has chosen a life of Christianity. The Confirmation service is considered to be very solemn in Norway.

After the Confirmation service, Their Majesties the King and Queen hosted a lunch in the Palace’s Great Dining Hall in honour of Princess Ingrid Alexandra. The royals were served a tasty lunch, consisting of avocado with salmon tartar for an appetiser, followed by halibut with fall vegetables.

All week, the Princess’s confirmation has been discussed in the various Norwegian and international media. The festivities began on Friday when thousands of Norwegians signed in the congratulations-protocol to congratulate the young Princess on her confirmation.

On the occasion of Her Royal Highness Princess Ingrid Alexandra’s confirmation, the Royal Court opened the Royal Palace to receive the people. In a small room just to the right of the entrance lies the “protocol chamber”.

The Royal Court opened to the public to sign their name from 3 pm to 6 pm. Members of the Norwegian government signed the protocol during the weekly state council while the diplomatic corps signed the memorandum when the state council was over.

Also called a bunad, the costume is a reconstructed women’s costume from Aust-Telemark. The Princess chose elements for the costume, and Her Majesty the Queen took an active part in the project.

In an interview with state television, Queen Sonja said: “The King and I want to give all our grandchildren a costume. This is because it is practical, aesthetically pleasing and has a history.”

Briadcaster NRK revealed that work on the bunad started this winter. Princess Ingrid Alexandra has been instrumental in choosing patterns and colours for the costume. It is custom made.

Princess Ingrid Alexandra, the elder child of Crown Prince Haakon and Crown Princess Mette-Marit, was baptised in the Palace Church in April 2004. She was carried into her christening by her grandfather, King Harald V – he was also one of her godparents. Her other godparents are King Felipe VI of Spain, Crown Prince Frederik of Denmark, Crown Princess Victoria of Sweden, Princess Märtha Louise of Norway and Marit Tjessem.

The 15-year-old is second in the line of succession and the first female heir to the throne since the 1400s. As heir to the throne, the Princess must confess to the Evangelical Lutheran religion. Although the state church ceased in 2017, the Parliament chose to retain the royal confession clause in the Constitution.

It has been I ver 30 years since the last royal confirmation was held in Norway. It was in 1988, when Crown Prince Haakon, Princess Ingrid Alexandra’s father, was confirmed.