Who is Queen Rania of Jordan? 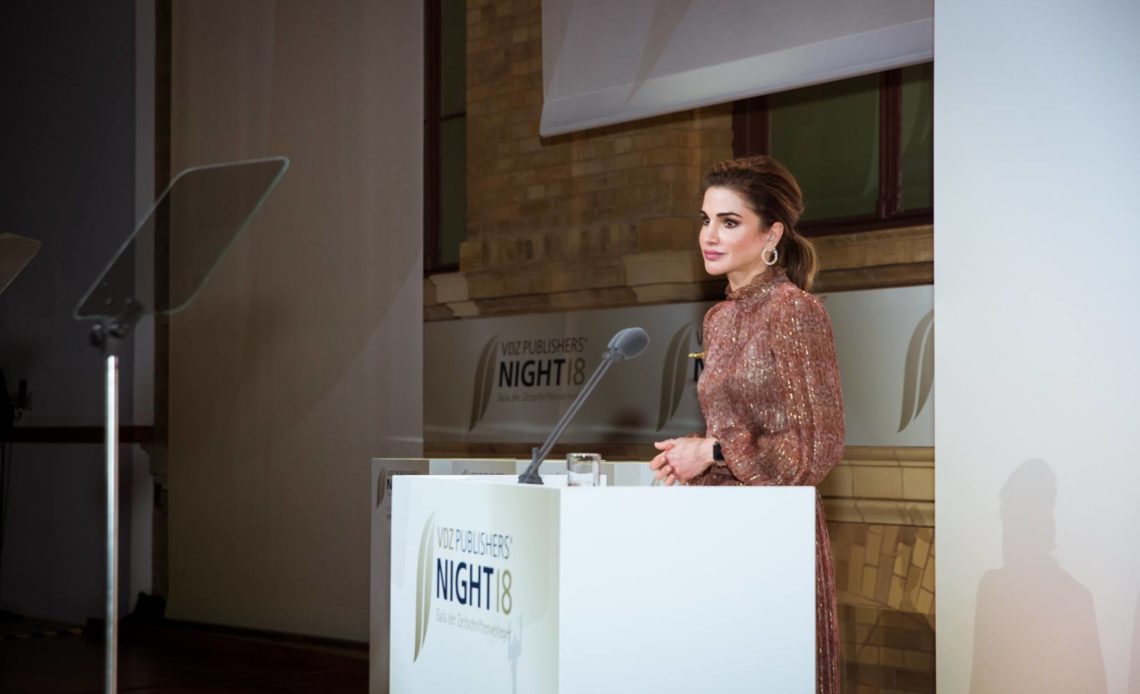 Rania Al-Yassin was born in Kuwait City, Kuwait, on 31 August 1970, to Faisal Sedki al-Yassin, a pediatric doctor, and Ilham Yasmin, both of whom were Palestinian. Her parents moved from the West Bank to Kuwait just before the 1967 Arab-Israeli War. She has one older sister, Dina and one younger brother, Magdi. The family regularly visited their family in the West Bank. For her education, she attended the New English School, which is a private school in Jabriya, Kuwait.

In 1987, she began her university education at American University in Cairo, Egypt, where she studied business and computer science. She graduated with her degree in Business Administration in 1991. In an interview with Elle Magazine in 2006, Rania, when discussing the life she had imagined herself living as a young woman, said, “When I was in college, I studied business, so I would probably have become a businesswoman. I thought I would start my own company or something like that. I think I was open to ideas. Like most graduates, I didn’t have a set path that I wanted to follow.” Aside from her native Arabic, she also speaks English fluently.

The Gulf War began in 1990, and by 1991, Rania and her family left Kuwait, like many others during this time of war when Iraqi forces invaded the country. The settled in Jordan, where Rania would briefly work in marketing at Citibank and Apple Inc., in Amman.

In January of 1993, Rania met then, Prince Abdullah of Jordan at a dinner party, hosted by Abdullah’s sister, Princess Aisha. Her Majesty admitted that she was a bit wary knowing that he was the son of the King of Jordan. Two months later their engagement was announced. Abdullah and Rania were married in a traditional Muslim ceremony on 10 June 1993. British designer Bruce Oldfield created her wedding dress.

Their first child, Crown Prince Hussein bin Abdullah was born in Amman on 28 June 1994. He was not named heir apparent until 2004, replacing his uncle, Prince Hamza, after his father King Abdullah stripped Hamza of his title and heir apparent status. Hussein was given the title of HRH The Crown Prince in 2009. Their eldest daughter, Princess Iman bint Abdullahfollowed on 27 September 1996. On 26 September 2000, Princess Salma bint Abdullah was born, and their youngest child, Prince Hashem bin Abdullah was born on 30 January 2005.

Things changed for the royal family when Abdullah was proclaimed heir apparent in January of 1999 by his father, King Hussein. Originally, King Hussein’s younger brother Hassan had been designated as heir apparent. On 7 February 1999, King Hussein passed away after a battle with non-Hodgkin’s lymphoma. At this point, Abdullah became King Abdullah II of Jordan. On 22 March of that year, Abdullah issued a proclamation making her queen. Without this, Rania would have been princess consort.

Her Majesty regularly champions causes close to her heart. In Jordan, she is passionate about education, community empowerment, and the youths of the country. On a global scale, she works regarding global education, microfinance, and cross-cultural dialogue. In an interview with Oprah Winfrey, Queen Rania said, “As you educate a woman, you educate the family. If you educate the girls, you educate the future.”

The initiatives Rania advocates for are The Queen Rania Foundation for Education and Development, Jordanian River Foundation, Edraak, The Children’s Museum Jordan, Royal Health Awareness Society, The Queen Rania Teacher Academy, Madrasati, The Queen Rania Award for Excellence in Education, The Jordan Education Initiative, National Council for Family Affairs, and Al-Aman Fund for the Future of Orphans. She has also become very passionate about campaigning for the refugees fleeing from the turbulent Middle East after the rise of terror organisations like Daesh in the region. Further, she works to help stop the misconceptions about Islam around the world and to defeat the spread of the extremist ideologies. During a 2015 interview with Nabila Ramdani from MailOnline, Queen Rania said, “We have to stand together united to defeat these groups, and to reduce our suspicion of the West as well, just as the West should not fall for stereotypes about Muslims, and Islamophobia, otherwise it is groups like IS who win.”

Her Majesty has written children’s books and short stories, some of which can be found on websites like Amazon. In 2000, she authored the book The King’s Gift as a tribute to King Hussein. All proceeds from the book benefit of underprivileged children across Jordan. Her second book, Eternal Beauty was written in celebration of Mother’s Day in 2008 and released as part of the Greater Amman Municipality’s contest: Mama’s Story. Maha of the Mountains was written in 2009 for the Big Read event, which is part of the Global Campaign for Education. Finally, Queen Rania wrote The Sandwich Swap in 2010 with Kelly DiPucchio, which was inspired by an event from her own childhood. The book went to the top of the New York Times Bestseller List for children’s books May 2010.

Rania holds many different international roles and positions, alongside her national roles. She is the Honorary Chairperson of the Jordanian Chapter of Operation Smile, Co-Founder and Global Co-Chair of 1GOAL, Honorary Member of the International Advisory Council for the International Center for Research on Women, member of the World Economic Forum Foundation Board, Co-Chair of the Arab Open University, Honorary Chairperson for the United Nations Girls’ Education Initiative, and many more.

She is a member of Knight Grand Cordon with Collar of the Order of al-Hussein bin Ali. She also holds many foreign honours from the following countries: Bahrain, Belgium, Brunei, Germany, Italy, Japan, Netherlands, Norway, Portugal, Spain, and Sweden.