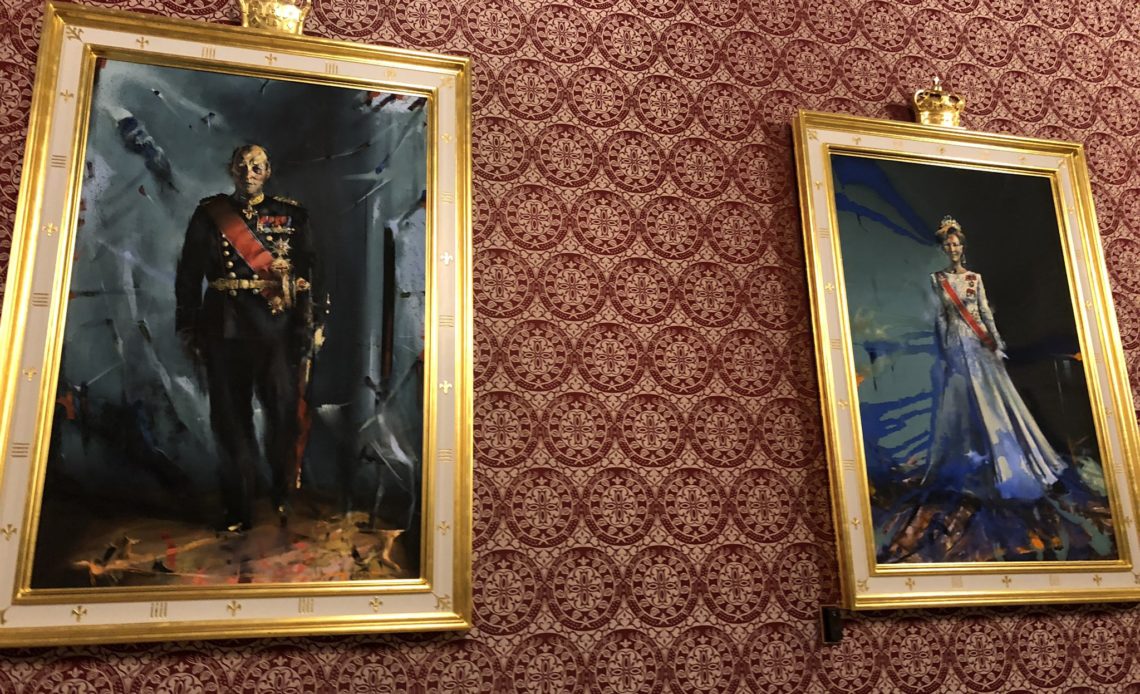 Oslo City Hall stands out in many ways from other city halls. It is best known for hosting the Nobel Peace Prize Ceremony every December 10 with the entire Norwegian Royal Family present. Construction was completed in 1950. But an unknown side of the building is that it also has a banquet-hall that houses four beautiful royal portraits. Let us take a look at them.

When entering the banquet-hall the first that meets you is a pair of portraits featuring King Harald and Queen Sonja. The portrait of Harald V was unveiled in 2002 by the king himself. Harald came to the unveiling with his children, Crown Prince Haakon and Princess Märtha Louise, as well as Princess Astrid and her now late husband. They all applauded heartily when the large portrait was unveiled. During the ceremony, King Harald said: “I probably am not the right person to consider it, but I see a mirror image of myself. An interesting mirror image.”

A lot of debate erupted that there was no portrait in the City Hall of Queen Sonja. Therefore, the artist painted a picture in the same style and this historic image of the queen consort was unveiled in 2003. Queen Sonja’s first comment on the painting was: “This is a very nice portrait with exciting use of colour”. Both the portraits are painted by Norwegian artist Håkon Gullvåg who worked on each royal painting for nine months. Both portraits show the king and queen standing faced towards the viewer. King Harald is dressed in his general gala uniform, while the queen is in gala dress and jewels.

The Queen liked the paintings of herself and the King so well that she engaged the artist to create two more portrait paintings of herself and the King. These were completed a few years later and hang today in the small banquet hall of the Royal Palace in Oslo. It is not difficult to see the similarities between the portraits from Oslo City Hall and the portraits that hang on the palace.

Next to the portraits of the present king and queen hangs the portrait of King Olav V who was king of Norway between 1957 and 1991. The portrait shows a happy King Olav, smiling, standing on the castle balcony during the annual 17th of May parade, dressed in his black morning dress. The portrait was painted by Jan Thomas Njerve and was unveiled in 1983 when King Olav turned 80 years old.

The portrait was the official birthday gift to the monarch from the City and people of Oslo. Jan Njerve who died in 2014 was in his time Norway’s most famous painter of royal portraits. In total, he painted 20 royal portraits, several of which hang in the Parliament and at the Defence Ministry. He was one of King Olav’s favourite artists. King Olav once said of Njerve: “This is the artist who has painted me the most correctly”.

The last royal portrait in the banquet-hall is a portrait of King Haakon VII. The portrait is the only where the monarch is sitting. King Haakon sits in his Admiral uniform, which he used more than his general uniform, in stark contrast to his son and grandson. This is also the only royal portrait in that room painted by a woman. The portrait was unveiled in 1948, three years after World War II was over as a gift to the king for his efforts during the conflict. King Haakon expressed in a speech that he thought the gift was moving.

The artist was Agnes Hiorth who also painted many royal portraits. She painted at least eight famous portraits of King Olav throughout his life and many other royals. When asked why she did not paint more than one painting of King Haakon, she replied that she was so satisfied with the portrait of King Haakon that she did not dare to portray him in any other way out of fear that it would not be worthy pf the king.

If you want to see these great portraits, it is possible to do so. Oslo City Hall is open to anyone who wants to see these pictures, the other pictures that hang there and the unique architecture that the building has. You can walk on your own in the building any weekday between 9am and 3pm.