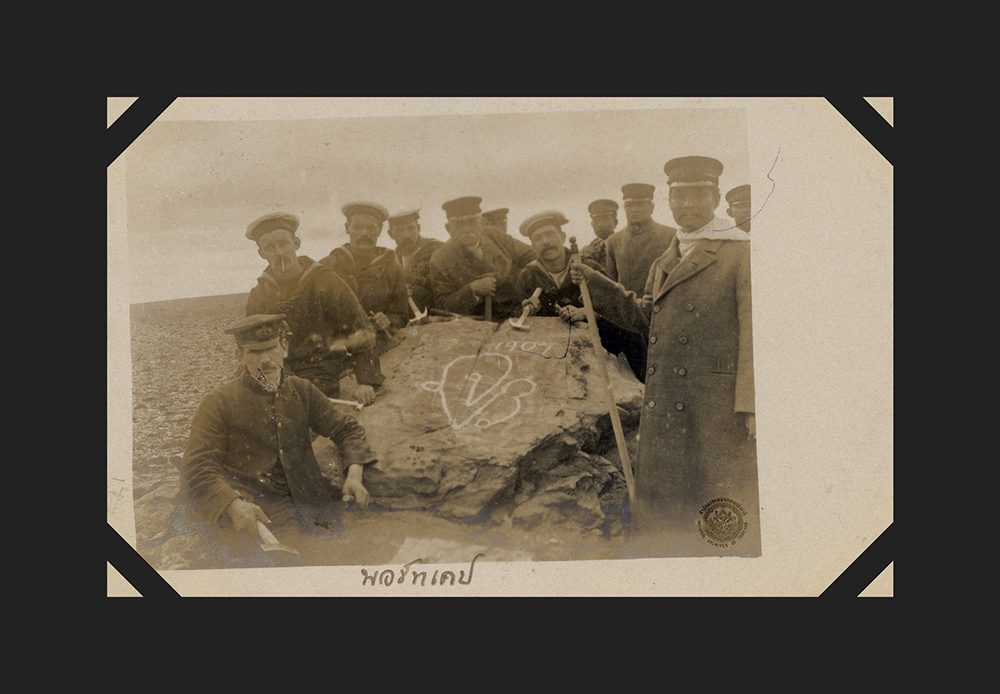 King Rama V and his monogram in a stone in Northern Norway. Photo: National Archives of Norway and Thailand.

His Majesty King Rama V of Siam, present-day Thailand, also called King Chulalongkorn, was born in 1853 and died in 1910. As a fifteen-year-old, Chulalongkorn ascended the Siamese throne, but because of his young age, his uncle acted as his guardian.

During his five years of custody, he was educated by an English governor, Anna Leonowens, in literary history, language and art. He was King of Siam from 1868 until his death in 1910. King Rama V is considered to be one of the highest-rated Kings by the Thai people. He is considered, like his father, as the father of modern Thailand.

The King abolished the death penalty, slavery and the exaggerated bowing. He appointed a royal government council and prescribed elementary school for girls as well. During his life, the King had four well-known wives, 32 other consorts and 116 concubines. This resulted in the King being the father of 33 sons and 44 daughters.

Chulalongkorn was appointed with the Grand Cross of the Order of St. Olav in 1884. King Chulalongkorn visited Europe twice, in 1897 and 1907, intending to seek political allies to secure Siam’s independence and to improve diplomatic relations with European countries.

The longest visit to Europe was the one in 1907, and he visited Norway that summer. The King was also very interested in photography, and his unique photos have now been published with the help of the National Archives of Norway and Thailand.

King Chulalongkorn arrived in Norway on 5 July 1907. In Norway, he was met by the newly crowned King Haakon VII and Queen Maud. The journey was not a diplomatic journey in itself, but the visit helped to strengthen the diplomatic relations between the two kingdoms of Siam and Norway.

The arrival marked the start of a 28-day journey through Norway for the King and his entourage of 20 people. During the journey, he experienced Norwegian nature, saw and learned about the Norwegian industry and met a wide range of the Norwegian population.

Throughout the journey, the King wrote letters home to his daughter, Princess Nibha Nobhadol. These letters were later collected and published in book form. The collection is called “Klai Ban”, which means “far from home”.