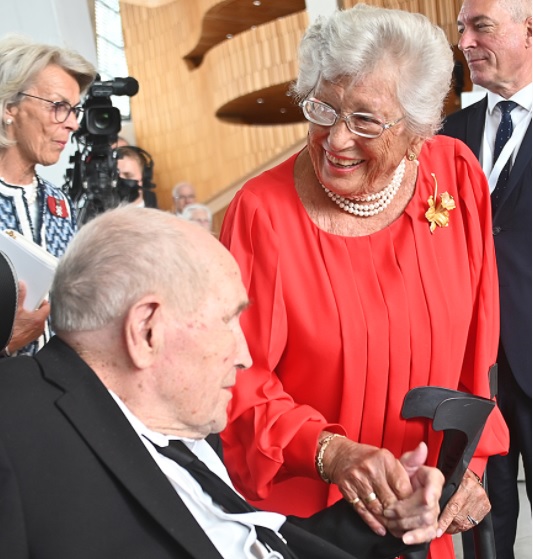 King Harald was joined by his son, Crown Prince Haakon, and his sister, Princess Astrid, at the government’s liberation lunch on the occasion of the 75th anniversary of Norway’s liberation from German occupation.

Veterans from World War II were invited to lunch at the Oslo Opera House. The royal family and all guests were welcomed by Prime Minister Erna Solberg. The Armed Forces Staff Music Corps played during the guests’ arrival at the Opera House.

His Royal Highness the Crown Prince thanked war veterans and contemporaries for the efforts they made for Norway during World War II. In his speech the Crown Prince said: “What we are gathered for here today is first and foremost about two things: The most important thing is to thank you. On behalf of the Royal Family and the entire Norwegian people, I would like to say thank you for everything you have given, for everything you have sacrificed, so that we can live in a free country. The second is to give you, and ourselves, a promise that we who did not experience the war ourselves will tell the stories of it further. Not just as knowledge of the past, but as a living value discussion about what these stories mean to us today, so we will never forget what thousands of people in our country have suffered and sacrificed their lives for.”

Resistance fighter, August Rathke, spoke on behalf of the war veterans and contemporaries. Rathke, who was sitting at the Crown Prince’s table during the meal, was part of Company Linge and the action group Saborg. He is the only member of the company still alive.

The lunch was supposed to have been held last year in connection with the 75th anniversary of the liberation of Norway from the German occupation, but was postponed due to the coronavirus pandemic. The 170 guests were served a three-course lunch which consisted of seafood with biscuit, oven-baked fish with root vegetable puree, red wine sauce and duchesse potatoes. For dessert, berry mousse cake was served with fresh Norwegian berries.